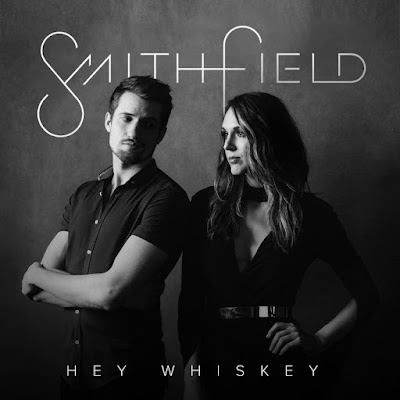 If you're not familiar with Smithfield, let me give you just a few outstanding things you should know about this great duo!

- Named an ‘Artist to Watch’ by PEOPLE, Billboard, Rolling Stone Country and the Huffington Post

- The music video for “Hey Whiskey” can be seen on CMT and has more than 1.5 million YouTube views

- Since making their Grand Ole Opry debut, Smithfield has performed on the coveted stage 19 times

“Hey Whiskey” is relatable, clever and hooky, and those harmonies are just flawless. The duo’s Jennifer Fiedler and Trey Smith are perfectly in sync.”

“She can’t hold her lover while he’s in the clutches of alcohol. The lyric is dynamite. The delivery is piercing and emotional. The production is solid. Play it.”

“’Hey Whiskey,’ a harmony laced ballad about a lover whose true mistress is at the bottom of a glass. Not in bed.”

“Smithfield exploded onto the scene with their originals, including “When You’re Gone” and “Nothing But the Night.” It wasn’t until “Hey Whiskey,” though, that the audience solidified their love for the up-and-coming country duo hitting radio later this March.”

"Rising country duo, Smithfield, took the stage to warm up the eager crowd… Closing out the 45 minute set with their latest single (slated to head to country radio in March) “Hey Whiskey”, Smithfield’s harmonies and incredible on-stage chemistry was the perfect way to kick off the night.”

“Overall, SmithField was able to warm up the stage for Irving Plaza headliner Granger Smith. Their harmonies were simply glorious. Their music is worth more than just a passing glance, and they are recommended seeing live in concert.”

“Led by Fiedler’s gorgeous vocals and supplemented by Smith’s harmonies, “Hey Whiskey” is likely to be a song that country music fans are Shazam’ing left and right to find out who is behind the gorgeous tune that will hit you as fast and hard as a shot of whiskey.”

“It takes more than a couple of great voices to make a memorable country duo. You’ve got to have that certain chemistry, extraordinary harmonies and a shared passion and drive to persevere through the many obstacles the music industry can throw at you. Smithfield are poised to show that they posses all of these qualities and then some.”


For more info on Smithfield, check out www.smithfieldmusic.com.

Posted by LovinLyrics at 3:55 PM