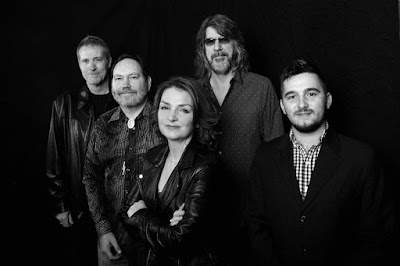 Who: GRAMMY® winners The SteelDrivers
What: 10th anniversary celebraton of SteelDrivers and Bluegrass UndergroundWhere: The Caverns, 555 Charlie Roberts Road in Pelham, TN 37366When: Sunday, August 17

GRAMMY® award winning band The SteelDrivers will perform at The Caverns in Pelham, Tennessee on August 17. The underground "performance hall," known as The Cave, will host Bluegrass Underground's 10th anniversary celebration, along with The SteelDrivers' own milestone of 10 strong years of highly acclaimed albums with numerous awards. Doors open at 6 p.m. with show time at 7 p.m. Tickets are available now and can be purchased here.

“It’s hard to believe it’s been ten years since our first album,” band co-founder, lead singer and fiddle player Tammy Rogers muses. “And yet, even with all the change and transition, we still have the same joy and enthusiasm that we did in the beginning. Even as the trajectory changes, the story continues to unfold.” The SteelDrivers recently announced the addition of new lead singer Kelvin Damrell from Berea, Kentucky.

Only Nashville could give birth to a band like The SteelDrivers: a talented group of seasoned musicians - each distinguished in his or her own right. The group's bluegrass roots combine with country and soul influences to create a refreshing, decidingly contemporary sound. This is new music with an old feeling. The SteelDrivers fan, Vince Gill, describes the band's fusion as simply as "an incredible combination."

The band's recent tour dates have wow'd critics, who praise the band's "gutsy, gritty, bluegrass songs" (Juli Thanki, The Tennessean). Writing in the Philadelphia Inquirer Ad Amorosi declared, "You can call it power-bluegrass or country soul, but whatever you call it, Nashville's SteelDrivers have bushels of it." To learn more about the world-class musicians and performers, visit www.thesteeldrivers.com.