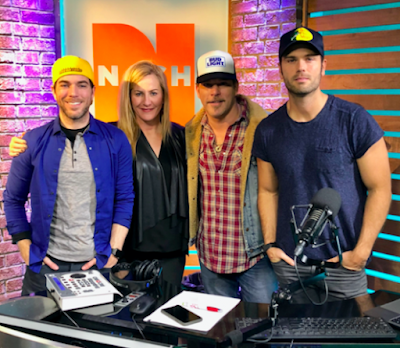 Craig Wayne Boyd stopped by NASH FM/Cumulus 103.3 this morning, April 11, to chat with Ty, Kelly & Chuck about his newest single, "Better Together."

"'Better Together' is a song we wrote about an experience on top of a hotel in Santa Monica with my then girlfriend now wife, Taylor," says Boyd. "It was an experience that will forever be with me and am glad that I get to share it with the world."

"Better Together" is the second single from Boyd's October 2017 release Top Shelf, the Texan's debut album since winning the highest ever rated season of NBC's The Voice.

The romantic ballad was written by Boyd, Brett James and Will Edwards, and tells the story of Boyd and his wife. Confessing that although he's seen and been to all of these places before, it's an entirely different experience with her by his side.

"Better Together" follows the album's lead single, "Stuck in My Head," that was released in late 2017.