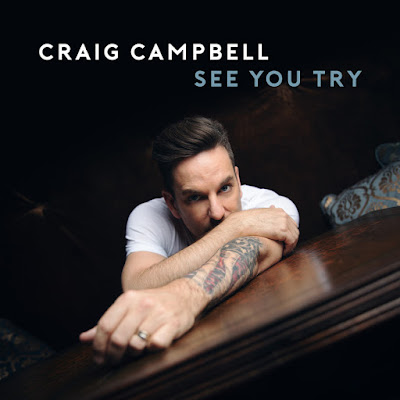 
The wait is over for Red Bow Records hitmaker CRAIG CAMPBELL and his legion of Country fans. Five years after the Georgia native last released a new collection of tunes, his SEE YOU TRY EP arrives on June 8.

Featuring seven tracks, which once again show off the smooth, expressive vocals and easy charisma that earn Campbell comparisons to icons like Alan Jackson, SEE YOU TRY finds the singer-songwriter maintaining his reputation for country authenticity – but also looking ahead to the future.

“For the past few years, I’ve created and found some of the best music of my career,” shared Campbell. “I’m beyond excited to release this EP and show the Country music world what I’ve been up to. I’m very proud of the music and can’t wait for everyone to finally hear these songs!”

Leading the project is the flirtatious new single “See You Try,” a hot-blooded barstool anthem that Rolling Stone calls “a big, bold song that shoots for the nosebleed seats of arenas everywhere.” The track is currently rising through the Country charts and has gathered nearly 1 million Spotify streams.

Meanwhile, SEE YOU TRY also includes two versions of Campbell’s “Outskirts of Heaven,” his most sincere and impactful single to date. Open hearted and full of faithful conviction, the uplifting critic’s hit is presented in both electric and acoustic settings.

Other standout moments on the highly-anticipated EP include the regretful romance of “Me Missing You,” the party-ready Tejano twang of “Mas Tequila,” the lusty rock ballad “Upstairs” and the slinky strut of “Kids in the South,” all written by top flight tunesmiths like Florida Georgia Line’s Tyler Hubbard, Jim Beavers, Ben Hayslip and Campbell himself.

Here’s the complete track list for SEE YOU TRY:

In related news, Campbell will host his 6th Annual Craig Campbell Celebrity Cornhole Challenge on June 5th at Nashville’s City Winery. As a national spokesperson for Fight CRC – a charity organization which supports research, education and awareness for colorectal cancer – Campbell raised over $200,000 for the cause with last year’s event, and hopes to top that mark as fans donate for the chance to battle another star-studded lineup in 2018.

A regular guest on the historic Grand Ole Opry stage, exceptional vocalist and critically acclaimed live performer, Campbell is on the verge of breaking out to superstardom after nearly a decade of success on the Country radio airplay charts and beyond.

Songs like “Family Man,” “Fish” and “Outta My Head” struck a chord after the singer-songwriter was discovered in Nashville’s famous honky-tonk, The Stage. Since then, “Keep Them Kisses Comin’” has cracked Country radio’s Top 10 and “Outskirts of Heaven” found tastemakers praising Campbell’s heartfelt sincerity, paving the way for the next chapter of his story.

Campbell is coming off a standout year which included Luke Bryan’s 2017 HUNTIN’, FISHIN’ AND LOVIN’ EVERY DAY Tour, and will headline select dates across North America throughout the summer of 2018.