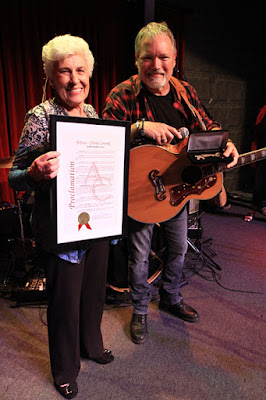 Grammy winning singer-songwriter, John Berry continues to celebrate his 25th Anniversary since signing his major label deal and moving from Athens, Ga., to pursue his recording career in Nashville, Tenn. John brought the show back to the city where it all began for a full band performance at The Foundry in Athens, Ga., for a Homecoming Celebration.

Surprising John during the middle of his performance, Nancy Denson, Mayor of Athens-Clarke County, Georgia, presented him with an official Proclamation naming June 16, 2018, Official "John Berry Day" and a special surprise gift, the Key To The City, as a gesture of thanks, honoring John for his many unselfish contributions and significance in giving to the community of Athens

"I am very proud of everything I have accomplished the past 25 years, but even more than the awards and opportunities, I am proud of where I came from,” says John Berry. “Celebrating with the people who got me to where I am today, and who continue to support me and my music means everything to me.”

"John Berry is one of the great success stories that helped establish Athens reputation as a Music City, which draws thousands of tourists to our community every year,” said Nancy Denson, Mayor of Athens-Clarke County, Georgia. “Athens area fans pack the house to enjoy his beautiful tenor voice when he returns to his music roots in Athens. It gives me great pleasure to officially express Athens pride in John on his 25th Anniversary of his first major contract signing which took place in Athens.”

Special guest performers during the homecoming celebration show included Bill Pappas and Kenny Head during the three hour performance for the sold out, fan-packed show filled with friends and fans of all ages. Bill and Kenny were both members of John's band, The Pack, for four years and played on John's 1990 independent CD Saddle the Wind.

Keep up to date with John Berry on his website johnberry.com and "Songs & Stories with John Berry" at songsandstories.com. Music is available for download on digital retailers iTunes, Amazon Music and streaming on Spotify and Pandora Music.