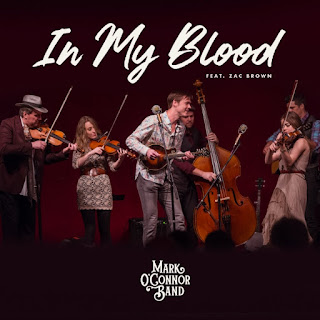 “In My Blood” is a showcase of the bands Americana music roots, with a touch of Nashville. The single is anchored by the storytelling vocals of Kate O’Connor and backed by the trademark fiddle playing that launched the career of Mark O’Connor.

“In My Blood” is the result of what happens when we come together to celebrate music, inspiration, love and passing these good things down to the next generation. Truly a family affair, this uplifting song was co-written by my son Forrest,” said band leader Mark O’Connor.

The single showcases the depth of talent within the musical family, while incorporating a strong vocal finish from Brown.

“The Mark O’Connor Band is the real deal. Mark is a musical genius and has been a pioneer in the bluegrass and Americana community. He has collaborated across so many different genres, while still being recognized in his own stratosphere for his conquering of the fiddle, and that is something I truly admire. Now together with his whole band he’s really found his niche and it’s exciting to hear the sound they’re creating together,” said Brown.

Find out more about Mark O'Connor Band at www.oconnorband.com.

Posted by LovinLyrics at 2:02 PM