CURTIS BRALY GIVES CDX'S ALLY KELLY THE INTERVIEW OF A LIFETIME...SOARING ABOVE NASHVILLE IN A PRIVATE PLANE 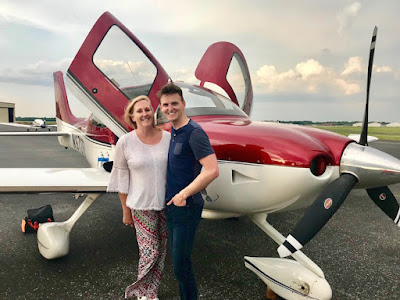 Curtis Braly took CDX’s Ally Kelly on the trip of a lifetime, 5,280 feet in the clouds aboard his private plane for his first ever mile-high interview. While navigating the skies above Music City, Curtis and Ally chatted about his single “Hate Me,” his album and what he has in store for the rest of 2018. To watch the soaring interview, click here.

“Doing the Mile High Interview with Curtis  was such an amazing experience,” Ally said. “ I am a fan of Curtis as a person and as an artist. Being with him in his plane high above Music City having a conversation about his new single and album and how those came to be was so exciting. Chatting about things from shows with Tanya Tucker to his CSI days while looking out the window at the majesty below was truly a highlight for me. Thank you, Curtis and everyone at StarPro for the experience! We at CDX are grateful to call you our friend!”

Braly, who has been an active pilot for over 13 years, loves to combine his passion for aviation and music. After purchasing Ruby (his plane) in 2017, he often takes flights to escape the craziness of the world below to have a moment of peace to focus on creativity.

“Any chance I get to go flying is a great day but then to combine that with talking about my other passion (music), makes for an awesome day!” Braly explained. “I wish I could do every interview this way!”

Braly is preparing to release his next single, a dance remix of one of his most famous tracks, “Song You Can Drink A Beer To” on July 6. The music video to accompany the song will be released on the same day and features the Real World’s Davis Mallory as the guest DJ aboard a wild and crazy party boat. “Song You Can Drink A Beer To (REMIX)” will be released to Spotify listeners exclusively for one week prior to the public release beginning June 29.

.Keep up with Curtis at www.CurtisBraly.com
Posted by LovinLyrics at 2:35 PM