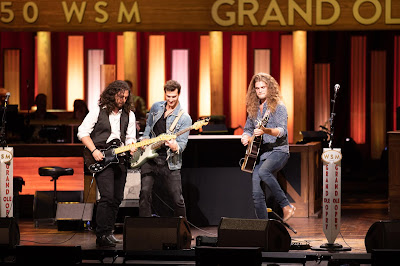 Although the three collectively had never before performed on Country’s most famous stage, Levon band member Ryan Holladay was a child prodigy and made his Opry debut as a five-year-old. Holladay began playing mandolin and singing harmonies as early as age three, and appeared on a “talented kids” episode of Oprah when has 11.  Ryan Holladay’s return to the Grand Ole Opry coincided with his 26th birthday. 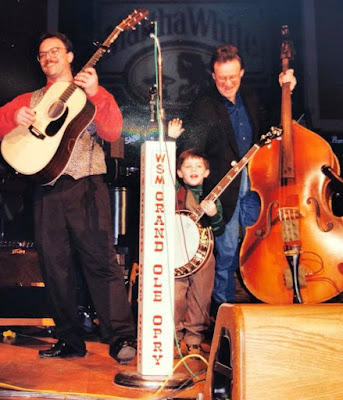 Levon’s Ryan Holladay is pictured here at his Grand Ole Opry debut as a five-year-old.  On the left is Mark Holladay, Ryan’s father,  on guitar. Blake Williams on bass is on the right.
Photo credit: J. D. Stigell

Levon’s Saturday Opry appearance showcased the trio’s engaging, soulful brand of country/rock and harmony-driven style. To start off their three-song set, lead vocalist Michael David Hall invited the audience to hold up their phones in flashlight mode to create a flickering starlit backdrop for the song “Barefoot on the Moon.” The band then performed “Till the Wheels Fall Off” and closed with the “Give Up Your Heart” which has received with a standing ovation. 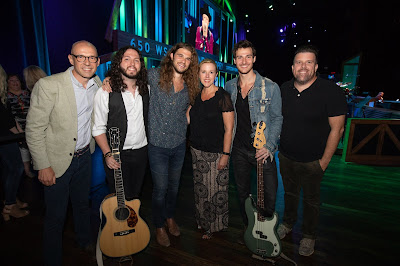 A few of the trio’s musical roots are suggested by their name, an homage to the talents of The Band’s Levon Helm, as well as Elton John and his song, “Levon.”  All in their twenties, Levon’s members nonetheless share a collective musical passion for the 1970s “Laurel Canyon Sound” generation whose lyrics and melodies have remained relevant long after their time on the charts.

To date, the band has performed festival dates and opening slots for such artists as Florida Georgia Line, Lady Antebellum, Willie Nelson, Kelsea Ballerini, Alabama and many others.