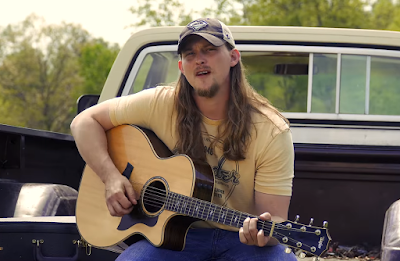 Meet new artist, AJ Sanders. AJ is an independent artist from Hartsville, SC. Having graduated from Coastal Carolina University with a BA in Graphic Design, AJ spent his time on the golf course as a professional golfer in hopes of making it on the PGA Tour. After some time, he realized his true passion was music and performing which led him to pack up in the middle of the night and move to Nashville, telling only a few friends and family.

His path to Nashville also led him to a  songwriter's night where a chance meeting with his producer, hit songwriter Bridgette Tatum took place. Bridgette wrote "She's Country", the #1 hit song for Jason Aldean which spent 2 consecutive weeks at the top of the country charts. Knowing there was something special about their connection, they co-wrote his debut album which is due to be released later this year. In February, he released his first single “Bar Tonight”, which has received more than 50K streams on Spotify.  His follow up single “Chevy and Daddy” was officially released on June 6 and is be available on ITunes, Amazon, Spotify, Google Play, CD Baby, and all other major digital download outlets.

Please share his music, tell other country music fans to check him out! If you purchase his music online, please leave a review and let him know what you think! Post about it on social media. Spread the word!

Get to know this southern voice and connect with him online: