TOBY KEITH DISCUSSES HIS BUSINESS VENTURES, SUPPORT FOR THE MILITARY, AND HIS STRONG WORK ETHIC ON THE BIG INTERVIEW, AIRING OCTOBER 16 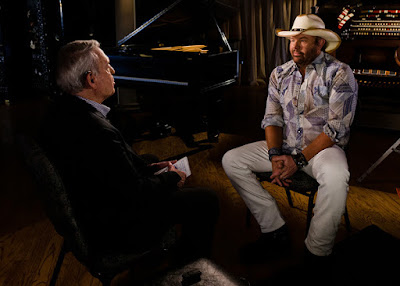 The “Big Dog Daddy” rolls into the “Trailerhood” as Country icon Toby Keith sits down with Dan Rather in an all-new episode of The Big Interview on Tuesday, October 16 at 9:00 pm ET. As he prepares to celebrate the 25TH Anniversary of his signature first single “Should’ve Been A Cowboy” from his self-titled 1993 debut album—which is being re-released by Universal with a new music video and three all-new tracks—Keith joins Dan to reflect on his life and legacy as one of Country’s most beloved artists.

During the episode, Keith discusses his highly successful business ventures ranging from the popular Toby Keith’s I Love This Bar & Grill restaurant chain, to the Wild Shot Mezcal tequila company, as well as staking a claim in the Big Machine record label, which represents some of Country’s biggest names including Taylor Swift. His work ethic is second to none, and he attributes this to a childhood spent on the oilrigs in Oklahoma, where his father worked for much of his life. Additionally, Keith reflects on his deep love for the military, and performing over 200 shows for the USO; opens up about his charity, the OK Kids Korral, which helps children with cancer; gets candid about his independent political views; and shares a high-spirited tale of smoking with Willie Nelson on a tour bus during an unforgettable night in Las Vegas.

In this exclusive look at the upcoming episode, Keith talks about life on tour and the love he feels being out on the road with his band and his crew, comparing the lively atmosphere to “a big party” that he could do “year-round.” While every show is a party now, it took a lot of hard work to get there, fueled by an unstoppable ambition that drove the megastar to outwork everyone else. “I didn’t take many vacations the first 20 years of my adult life, because my head was on the line,” he explains. “When I came out and my song hit, I was doing 28, 29 shows a month because I didn’t know I was gonna get a second hit let alone an 85TH hit.” It wasn’t until he had achieved sustained success that Keith allowed himself some downtime to enjoy the fruits of his labor, as he charmingly recalls, “After about 15 years, my family finally went, ‘Hey, are we ever gonna go to DisneyWorld?’”

Watch the clip below:

To see more of this insightful episode, tune in to The Big Interview on Tuesday, October 16 at 9:00 pm ET only on AXS TV.
Posted by LovinLyrics at 2:35 PM

looking forward on listening to Toby tell more of his wonderful career and family.