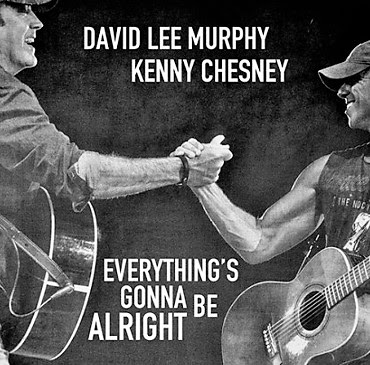 When Kenny Chesney decided to make what became No Zip Code with David Lee Murphy, he believed in the singularity of Murphy's voice as an artist and as a writer. When Murphy asked Chesney to sing on “Everything’s Gonna Be Alright,” a song about finding grace in the eye of the storm, he was honored to sing with his good friend.

“Sometimes you hear songs, and they just feel good,” says Chesney. “And occasionally one of the ones that feels so good says something that people are needing to hear. That’s how I felt about ‘Everything’s Gonna Be Alright’ the moment I heard it. Being able to be part of David Lee’s song was just awesome.”

And this morning – on “Good Morning America” – Murphy’s first No. 1 this decade was named the Country Music Association’s Musical Event of the Year. One of two pre-telecast awards, it started the CMA day off on a good note.

“David Lee is so singular, I’d hear his demos and think, ‘People need to hear this voice, and his perspective,’” Chesney says. “I couldn’t be happier to see him win his first CMA Award. We’ve sung this song all over America this year, and I’ve seen the way stadiums full of people respond. Every night when he’d walk out, they’d cheer – and when the chorus came along, it was something they wanted to sing with us.”

“The crowd sings along from the very first line with their hands in the air,” Murphy says. “What’s been heartwarming for me are the personal stories from people whose lives have been affected by this song. That’s what it’s all about.”

“My heartfelt thanks to everyone who made this possible,” Murphy responds, “especially my great friend Kenny Chesney. Love you, brother!”