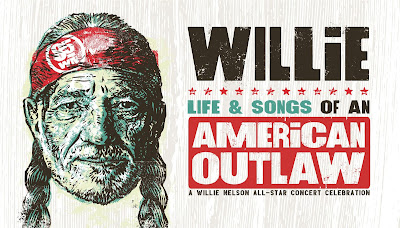 A&E NETWORK TO AIR SPECIAL CONCERT EVENT IN 2019
TICKETS ON SALE MONDAY, NOVEMBER 12 AT 10AM CT
VIA LIVENATION.COM

Blackbird Presents, Mark Rothbaum, and Keith Wortman are proud to announce the concert event of the year… Willie: Life & Songs Of An American Outlaw, A Willie Nelson All-Star Concert Celebration. This once-in-a-lifetime concert will take place Saturday, January 12, 2019 at 7PM CT at the Bridgestone Arena in Nashville, TN. This historic event will honor living legend Willie Nelson and feature his greatest hits performed by today's biggest superstars. This major event will be filmed and recorded for a major broadcast special slated to air on A&E Network in 2019.

Tickets go on sale Monday, November 12, 2018 at 10 AM CT online at Livenation.com, by phone at 800-745-3000, and the Bridgestone Arena box office. VIP packages including great seats and exclusive merchandise will be available. Citi is the official presale credit card of Willie: Life & Songs Of An American Outlaw. As such, Citi card members will have access to purchase presale tickets beginning Thursday, November 8 at 10 AM CT until Sunday, November 11 at 10 PM CT through Citi’s Private Pass® program. For complete presale details visit http://www.citiprivatepass.com.

In his 85th year, Willie Nelson is more prolific than ever. In 2018 alone, he's released his 67th studio album (Last Man Standing), a stirring collection of his favorite Sinatra songs (My Way) and headlined the largest touring festival in North America (Outlaw Music Festival). Willie is America’s music hero. It’s hard to put into words what he means to singers, songwriters, musicians, and people all over the world. Through life’s ups and downs, heartbreaks and rewards, Willie and his songs have been a dear and constant friend to all of us. He’s a trusted father figure to millions of Americans by lifting them up through FARM AID and his annual JULY 4th PICNIC. He’s the clear inspiration for dozens of today’s biggest music stars from all genres of music.

"Willie and his songs mean everything to music artists and fans alike. Like Willie, they have inspired us to remain true to ourselves in every possible way. This incredible lineup of artists on this show is a testament to that,” says Blackbird Presents CEO Keith Wortman.