TAKING "REFUGE" IN THE MUSIC OF GRIFFIN ANTHONY 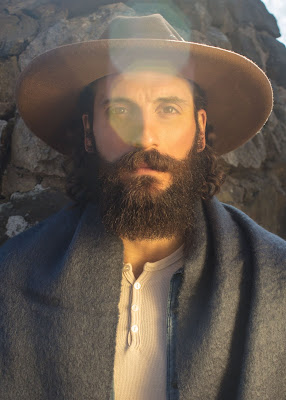 Meet singer/songwriter Griffin Anthony. Just his name brings to mind "unassuming and modest." Funny thing, because that's exactly what his music happens to be. Griffin provokes a gentleness that's anything but the norm in the world of today's music. It's a soft throwback to when music wasn't so mechanized and technical, a reminder of the simplicity of the magic that occurs when a pen is put to a piece paper, a voice is raw and natural and when combined with a guitar, evolves into something we could sure use these days, a change of musical pace, one that makes us slow down, listen to the silence between the notes and appreciate the gift. Griffin's new CD, "Refuge" is full of character and, as Fernando Botero once said, is"an oasis, a place or refuge from the hardness of life."

A native of New York, Griffin worked as a stagehand for the annual Newport Jazz and Folk Festival during his summers as a teen, realized (in his own words) that "language was power", began creating his own music and wound up signing with BMI and Orange Music Publishing in 2008.  He has performed at festivals including Wanee, SunFest and CMJ, while his music has been licensed by the likes of ABC, Hugo Boss and Disney.

"Refuge" was released on October 12 and was recorded at East Nashville’s The Bomb Shelter and produced by Jon Estes who has worked with the likes of Kesha and John Paul White and with assistance from Grammy Award-winning Andrija Tokic of Alabama Shakes. The simple 9 song collection will leave you feeling a little safer in a world of "in your face" music. It's a standout in a copy cat industry and while the folksy style may not be every listener's cup of tea, it sure beats some of the strongest shots of "whiskey" that are over-crowding the FM radio airwaves.

I could break this album down track by track but that wouldn't leave much to the listener's imagination, would it? The only way to truly GET this album is to sit in a quiet place, turn off the world and tune into these amazing stories of life, reality and situations we ALL can relate to. You'd be amazed how much of yourself you find when you get lost in some of these well crafted lyrical stories by Griffin.

Well done.Thank you Griffin Anthony for putting some feeling back in the music and for doing what a writer does best, putting his listeners in the middle of the story.

a great big 'thank you' and a mighty bear hug!

sendin' gratitude and positivity your way,