FAREWELL ANGELINA TO EMBARK ON SECOND LEG OF THEIR “WOMEN AND WINE” TOUR, RELEASE HIGHLY ANTICIPATED EP IN 2019 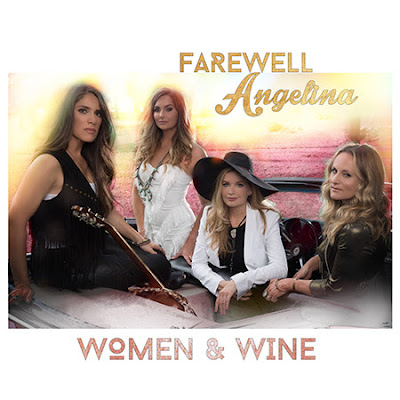 Named after a Bob Dylan song, female country group Farewell Angelina will embark on the second leg of their “Women and Wine” Tour in 2019 beginning Jan. 17 in Santa Rosa Beach, Fla., for their EP release show. The girls already have a packed first half of the year with even more dates to be announced soon, all to support the upcoming release of their new EP of the same name. Women and Wine will be released on January 25. All of Farewell Angelina’s tour dates can be found on their website at www.farewellangelinamusic.com.

"We are so thrilled to share this new project that represents each of our four personalities and sounds. This band is an ever-evolving, songwriting sisterhood that exudes our passion for entertaining and celebrating each phase in life through music (and wine)." - Farewell Angelina

The female powerhouse group just released their new single “Women and Wine” in mid-November and will be releasing their EP on Jan. 25. They will end 2018 with having played more than 75 shows. The “Women and Wine” acoustic video was premiered last month by The Boot and the girls have started a new video series titled “Wednesday Wine Buzz” with the first episode premiered on Parade.com and the second on Taste of Country.

Posted by LovinLyrics at 2:54 PM