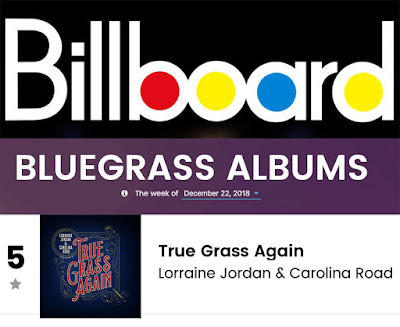 It’s been a December to remember for Bluegrass mainstays Lorraine Jordan & Carolina Road, who have even more reason to celebrate. The award-winning group’s latest album True Grass Again debuts this week on Billboard’s “Top Bluegrass Albums” chart at No. 5. The project achieves the highest debut, and largest performance gain out of any album on the chart.

The resurgence is partially credited to the award-winning band’s successful Christmas in the Smokies Bluegrass Festival. The 4-day event was held in Pigeon Forge, Tenn. and had its biggest audience to date. Lorraine Jordan & Carolina Road served as the host band for the festive weekend, which also saw performances from Bluegrass favorites like Doyle Lawson and Quicksilver, Paul Williams, Wilson Banjo Co., Williamson Branch and many more.

True Grass Again is fueled by the lead single, “True Grass” featuring Junior Sisk and Danny Paisley. The track has struck a chord with fans, currently sitting atop Bluegrass Unlimited’s National Airplay Survey. The multi-month No. 1 hit has created the True Grass Movement, which is fueled by the marketing and band leader's commitment to keep the traditional style alive which was made famous by genre legends like Bill Monroe and the Stanley Brothers. Fans can download and stream “True Grass” from the latest project True Grass Again HERE.
Posted by LovinLyrics at 12:17 PM