GRAMMY WINNING ARTIST, JEANNIE SEELY, LENDS TALENT TO “COUNTRY MUSIC: LIVE AT THE RYMAN - A CELEBRATION OF THE FILM BY KEN BURNS” 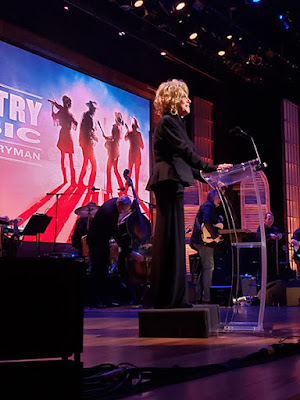 Grammy winning Country music artist and renowned songwriter, Jeannie Seely, was on hand to introduce documentary segments and a performance honoring Loretta Lynn by Kathy Mattea at the “Country Music: Live at the Ryman, a Concert Celebrating the Film by Ken Burns.” on March 27.

“This was absolutely fabulous! The incredible performances and well written scripts documenting the legacy of country music. I’m so proud to be a part of this history making event,” said Jeannie Seely. “Thank you Ken Burns and your wonderful team!”

“In country music, we found a love for storytelling that translates everyday experiences into universal truths that we can all identify with,” said Ken Burns. “We’re very excited to share this film with the country, in towns large and small, from one coast to the other. But we are most excited to share it in those areas that gave birth to this most American of art forms. Bringing our film to Ryman Auditorium, the Mother Church of Country Music, and a character itself in our film, is a dream for us.”

COUNTRY MUSIC was directed by Ken Burns and produced by Burns, Dayton Duncan and Julie Dunfey who spent eight years researching and producing the film, conducting interviews with more than 100 people, including 40 members of the Country Music Hall of Fame (17 of those interviewed have since passed on). Among those storytellers are historian Bill Malone and a wide range of country artists such as Jeannie Seely, Marty Stuart, Rosanne Cash, Vince Gill, Reba McEntire, Merle Haggard, Dolly Parton, Willie Nelson, Dwight Yoakam, Emmylou Harris, Kris Kristofferson, and Naomi and Wynonna Judd, as well as studio musicians, record producers and others. The film uses more than 3,200 photographs and over two hours of archival footage, including rare and never-before-seen photos and footage of Jimmie Rodgers, Johnny Cash and others.


Keep current with Jeannie Seely on her website and stay in touch with her on social media!
Posted by LovinLyrics at 10:09 AM