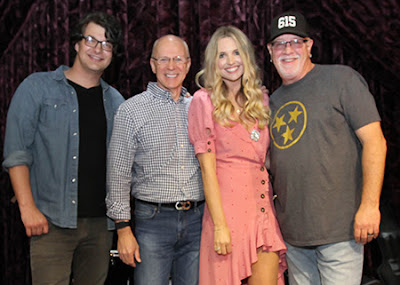 In a room full of music industry VIP’s, media, friends and family, Erica Stone shared several cuts and the stories behind the music she recently released on her current music project, Antidote. The long awaited and highly anticipated album was released on digital platforms on April 29 and featured on the New Music Nashville playlist. Download and streaming links available here.

“I’m not the girl that came to Nashville ten years ago. I’ve been on quite the journey and the music reflects just that. This record explores love, loss, what happens in the dark, and how important it is to let the light in,” reflects Erica Stone. “My hope is that each listener takes a piece of this album and keeps it tucked away... always knowing... regardless of the struggle... they are never alone.”

“Music should move you in some way; to action, to compassion, to change, it should touch your heart and move your soul. Erica brought all those things to the table when we started writing for the record, so the producing part came pretty easy,” stated Producer, Brian White. “Brian Bunn & myself really just captured an artist just being herself. What an amazing record, what a stunning artist, what a beautiful story. I feel privileged to be a part of her journey.”

The twists and turns of life nearly swallowed her, but she rises to the surface with incredible new music, new lyrics to tug at your heart and melodies that offer you courage to stand or a safe place to find solace.

Antidote, features two current singles by Stone, “Lies” and “Glass House.” The video for “Glass House” spotlights real stories from individuals who messaged her, willing to share their setbacks and insecurities in front of a camera. The collaborators on this project are those in her tight circle that worked with her nine years ago and stuck with her, when others strayed.

Keep current with Erica Stone at https://www.ericastone.net and on social media!