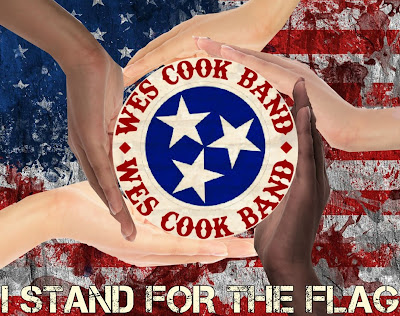 You may have caught the music video for Wes Cook Band's patriotic song "I Stand For The Flag" last July when it became a national news story around the Independence Day holiday. The single charted #1 on the iTunes Country sales chart, #2 on the iTunes all genre sales chart, and #24 on the Billboard sales chart for the week ending July 7, 2018. The music video received over 1 million views across the band's social media accounts and led to a publishing deal with Sea the Desert Entertainment. The group released the single to radio in April.

Wes Cook Band has also recently partnered with NASCAR driver Ryan Ellis. "I Stand For The Flag" will serve as inspiration for the #99 car's design for two races this year: Sunday June 16th, at Iowa Speedway, and Saturday, August 24th, at Road America. “As a lifelong NASCAR fan, it is an honor to partner with Ryan and share the message of this song”, explains Wes Cook. Ryan Ellis adds: “I am thrilled to represent not only the Wes Cook Band, but also this song. It’s great to have the support of my new friends, The Wes Cook Band. I know they love America just as much as I do, and I know the NASCAR fans share the same love for this great country!" The Wes Cook Band will also be joined by the Enlisted Nine Fight Company, Nine Line Apparel, Top Cover Hats, and Audio Video Specialists as sponsors of the #99 car for the two events.