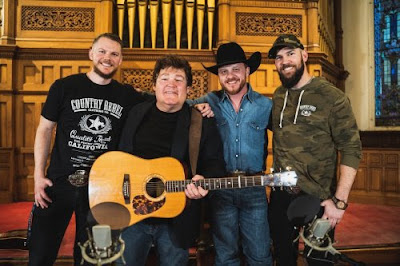 GRAMMY, ACM and CMA-Award winning singer Marty Raybon of Shenandoah and CoJo Music/Warner Music Nashville artist Cody Johnson have teamed to film a special acoustic music video of "I Can't Even Walk (Without You Holding My Hand)," exclusively for Country Rebel.

Johnson was wrapping his performance at Country Rebel's "The Church Sessions" when he learned Raybon was about to take the stage.

What happened next was spur-of-the-moment, as Johnson, a longtime fan of Raybon and Shenandoah, asked him to join him onstage for his final song. The two started to hum the chorus and within minutes, Country Rebel had captured a piece of country music magic.

"It was a real thrill to sing with Cody," says Raybon. "It was one of the highlights of which we've been experiencing for the last few years now. What truly excited me was when I heard that Cody had asked if I would mind singing with him on 'I Can't Even Walk (Without You Holding My Hand).' I thought 'goodness sakes alive, I'd love to do that!' It was a lot of fun and I'm really excited about what's going on with his career."

"We captured a priceless moment during a recent taping of Country Rebel's 'The Church Sessions,'" explains Kevin Blue, Country Rebel CEO and co-founder. "This unplanned, unrehearsed duet between Cody Johnson and Shenandoah is pure country music gold. We are honored to have connected these two incredible artists for an unforgettable duet with a powerful message."

The video premiered on Country Rebel's Facebook Page last week and has since racked up more than 13,000 shares and nearly a million unique views.