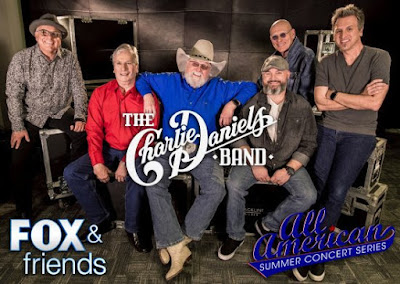 Legendary country and southern rock group The Charlie Daniels Band will perform live on this Friday morning's edition of the Fox & Friends Summer Concert Series on the Fox News Channel.

This year marks the 40th anniversary of Daniels' "The Devil Went Down to Georgia," a song that became a worldwide phenomenon following its original release in May of 1979.

Throughout the live broadcast, viewers can expect to see Daniels perform the iconic tune as well as several other songs that made the CDB a household name.

In addition to performing, Daniels will chat with Fox & Friends co-hosts Ainsley Earhardt, Steve Doocy, Brian Kilmeade and Senior Meteorologist Janice Dean about current CDB happenings as well as his mission to help veterans through his non-profit group, The Journey Home Project.

For more information, visit charliedaniels.com.
Posted by LovinLyrics at 11:16 AM