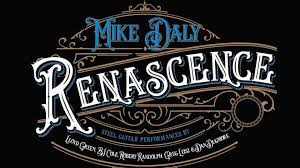 Daly, known for his extensive work with such legendary country artists as Hank Williams, Jr. and Travis Tritt, believes the instrument is only limited by a player’s imagination and skill level.

For his third album, Renascence, Daly backs up that belief as he invites a top shelf group of his peers to stretch their skills and knowledge and, in so doing, create a fascinating blend of textures, styles and good vibes from beginning to end.

Joining Daly are steel legends Lloyd Green, BJ Cole, Robert Randolph, Greg Leisz and Dan Dugmore. Together, the music moves effortlessly from one genre to another.

Daly compels listeners to move beyond standard instrumentation. There is no electric guitar, just bass, drums and organ and of course, the pedal steel.

“All the sonic textures were created on a slide instrument,” Daly explained to The Nashville Musician. “That was the goal. I wanted to created all that on the steel to show people there is a lot of depth, a lot of palates, and a lot of color.”