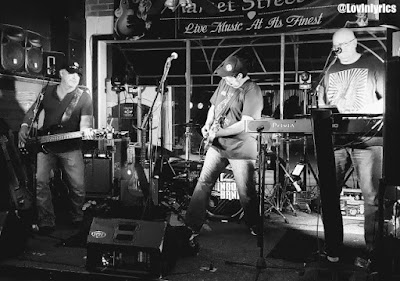 The mid-summer southern temperatures may have had a little something to do with it, but it was The R.T. Johnson Band and Cash Creek responsible for the hottest Friday night in Washington, NC at The Market Street Pub.

The Market Street Pub is a small, unassuming neighborhood bar a few blocks from the beautiful and  historic Washington, NC waterfront. It's a great place for friends to meet and strangers to become friends all while grabbing a cold drink and listening to some great music. I love this place and don't mind making the 2 hour drive and spending the money for a hotel room to see artists play here. It's places like that that remind me why I'd much rather spend my money and time at a smaller venue than any high dollar, mega-seat venue where you have to watch the show on a big screen from a distance unless you pay out the wazoo for an overpriced pit ticket. Here, the bands are more laid back, more engaging and honestly, I think more genuine. They are able to interact on a personal basis with those who came to see them, even share a beer or two and that to me makes a world of difference. The drinks are more than reasonably priced and the staff is great, they are always friendly and that attitude turns many first time visitors into friends and repeat customers. The stage is a perfect size, not too big and not too small, with great lighting and the sound is always on point.

Cash Creek kicked off the night opening for local favorites, The R.T. Johnson Band. If you haven't seen this band, do yourself a favor and make time to go see them if they're in your area. I'm not gonna gush (and trust me I could) but I am gonna put it out there how much I truly appreciate them and their music. These guys define talent, good music, and they're such great people. From the first song I ever listened to, "She Got Me", they got me. 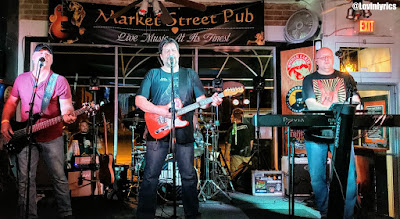 Kimo, Monty, and James have all done the big stages, big venues and big crowds for years as touring musicians for such artists as Alabama, John Michael Montgomery, Brad Paisley and others. They get it. They know what it takes to win a crowd and there isn't a single bit of ego in the room. These guys aren't looking to be "the next big thing" or "the next sensation", they just love what they do and they want to create good music that really connects and resonates with people and if a song turns into a hit,  that's great, and  if not, then they just keep writing and releasing songs because each one is always a "hit" with someone. Their songs are fun, some serious, some humorous and some relaying a positive message of encouragement, and they're all quality songs. You're not gonna hear the typical "white tank top, bed of my truck, hey girl" songs here. There guys are blessed with crazy talent both instrumentally and vocally. Monty's voice, well, it'll make your knees weak and then combine that with Kimo's spot on harmonies, it just works and it works damn well. Oh, and James can chew gum and play drums in time with Folsom Prison Blues. Ha! Just sayin'. This time, they had Ray Whitlock on the keys and dang that dude can play and sing. These guys are all just doing what they love and doing it well. They aren't chasing charts which is a welcome relief and they've already caught what matters, the hearts of dedicated fans. Now, that being said, radio needs to tune in to what they have to offer, it's different and unique and those two things are what listeners are most wanting right now, something DIFFERENT. Connect with them via their website at cashcreekband.com and on social media. They're great with fan connection and do it all personally so none of that social media manager reply stuff. They're as genuine as they come and that is so much appreciated.

They played a set of mostly originals with a couple of 80's rockers thrown in to keep the walls shakin'. Check out their latest single, "My One and Only Weakness" below and let your local stations know about it!

"Talkin' Dirty"
"The Hard Way"
"Wishin' My Life Away"
"Everybody's Workin' for the Weekend" (80's Loverboy cover)
"I Can't Wait"
"Make Your Mama Proud"
"Wanted Dead or Alive" (80's Bon Jovi cover)
"Fooled Around and Fell In Love" (80's Elvin Bishop cover and my favorite song ever.)
"My One and Only Weakness" (Current radio single)
"All About the Money"
"Pour Some Sugar on Me" (80's Def Leppard cover) The headliner was local favorite, The R.T. Johnson Band. I'm new to the RTB scene only having seen them twice so at this time, I don't have enough to fill a page like I do with CC, but give me time. These guys are really good, they even made me not mind listening to their version of "Old Town Road" for a few minutes and that in itself says a lot. LOL! I was able to stay for some of their set but truth be told, I may or may not have had too many IPA's thanks to the great bartending staff so ...
They were GREAT, kept the room rockin' and brought the country. I do have a request in for the set list which I'll add once I get it. They just signed with CCB Nashville over the weekend and have a brand new album coming up for release soon which I know is gonna be a game changer, so keep your ears open. I'll let ya know when I get the low down and where you can get it (and you SHOULD get it.). These guys are definitely a band to keep on your country radar. Meanwhile, check out their song "Summertime Hangover" below. Check out their Facebook page and follow them on social media. Great bunch of guys, great music and fun! 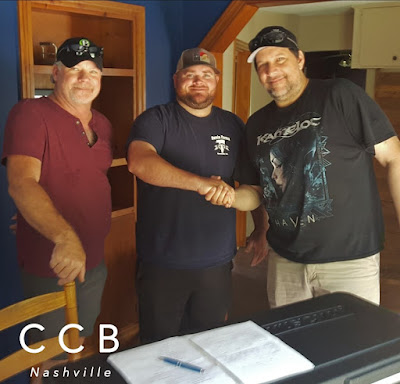 Posted by LovinLyrics at 5:13 PM