CRAIG MORGAN SHARES "THE FATHER, MY SON, AND THE HOLY GHOST" ON "THE KELLY CLARKSON SHOW" – THURSDAY, OCTOBER 17 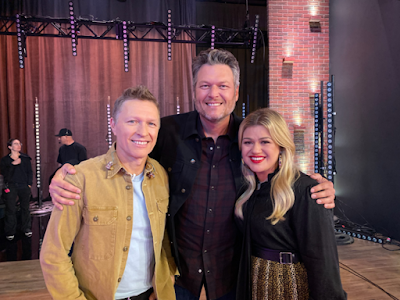 “The Kelly Clarkson Show” welcomes Craig Morgan to the stage tomorrow to share “The Father, My Son, And The Holy Ghost,” his faith-filled tribute to his son, Jerry. Prior to performing the emotional track, which Music Row proclaims as a “breathtaking reminder of just how moving great country singing and songwriting can be,” Craig was surprised as he was joined onstage by friend and fellow Opry member Blake Shelton to share how the song has inspired hope and faith in others facing painful loss. Watch Craig’s appearance on “The Kelly Clarkson Show” this Thursday, October 17, check local listings for showtimes at https://www.kellyclarksonshow.com/exclusives/where-to-watch.

Ahead of "The Father, My Son, And The Holy Ghost” topping the iTunes chart and finding early support at country radio in key markets such as Atlanta, Boston, Miami, Pittsburgh, Tampa and national airplay on Music Choice and Sirius XM, Craig filmed a music video for the song at his family’s The Gallery At Morgan Farms in downtown Dickson, Tennessee. The simple-yet-powerful performance video captures the raw, honest and hopeful lyrics embodied in the song. Watch the world-premiere this weekend during CMT’s “Hot 20 Countdown,” airing at 9am ET/8am CT on Saturday, October 19 and Sunday, October 20. CMT will also share the song’s inspiring message with tens of thousands of visitors from around the world when it broadcasts the video in New York City’s Times Square on Saturday, October 19.

Posted by LovinLyrics at 3:31 PM