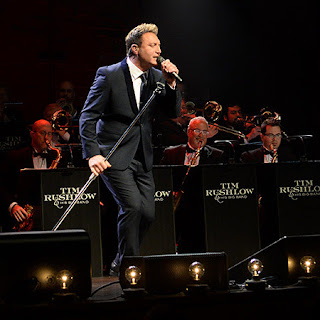 Anticipation is high as Tim Rushlow prepares to present his annual Home For The Holidays Christmas show with his All-Star Big Band at the Franklin Theatre on Dec. 2, 3 and 4.  These three shows will mark his first time back in his home town of Franklin since his two big sold out shows in 2016. Tickets are on sale and available for purchase here.

"I am so excited to bring my big band back to the Franklin Theater,” exclaims Tim Rushlow! ”There is not a better venue to swing in the holidays in classic big band music! Come kick off the season in style with me and the boys in the band!"

"Tim Rushlow is an accomplished artist who is not afraid to work hard, especially for his audience," states Paul T. Couch, Executive Director, The Franklin Theatre. "Our audiences can expect to see an expertly crafted show that will leave them dazzled by Tim’s big band sound and warmed by the sounds of their Christmas favorites, all expertly delivered by a superb showman."

The word “Entertainer” is often used to describe Rushlow, as he has the rare ability to not only perform songs across multiple genres, but to quickly grab the audience’s attention and engage them in an exciting and dynamic way. This same engagement is what fans can expect to be a part of when he fronts his Big Band and returns Home for the Holidays at The Franklin Theatre.

Rushlow and his Big Band carry on the musical romance and swagger of an earlier era and will transport guests back to a time when Christmas was “Classic.” Bing Crosby, Dean Martin, Frank Sinatra and Bobby Darin are the names that made Christmas music special and timeless. Relive the romance of this Christmas music tradition in the intimate setting of the historic Franklin Theater with Tim Rushlow & His Big Band Home for The Holidays with a heart-warming, and soul-stirring concert event led by multi-platinum recording artist, Tim Rushlow.

Fans are anxious to see what Tim will do next following his recent show-stopping set at the star-studded James Burton and Friends concert at the Schermerhorn Symphony Center in Nashville. Rushlow joined a cast of rock and country music royalty, including Brian May of Queen, Joe Walsh of The Eagles, Sammy Hagar, Steve Wariner and many others who gathered to honor Burton, a guitar legend who played onstage and in the studio with a “Who’s Who” of American music icons including Elvis, John Denver, and Glen Campbell and dozens others. Rushlow captivated the sold out crowd with a two-song tribute to Denver and his own smash hit “God Blessed Texas” from his days as the front man for Little Texas.

Leading off the high-profile week, Rushlow’s recording of the classic “Jingle Bells,” from his critically-acclaimed album Tim Rushlow Classic Christmas will be featured in the Hallmark Television movie ‘Christmas Town’ scheduled to air on Sunday, December 1, at 7:00PM CT.

Keep up with Tim Rushlow on his website which is currently under renovation with a brand new look to launch soon! In the meanwhile, you can connect with Tim on social media - Twitter, Instagram, and Facebook.
Posted by LovinLyrics at 3:16 PM