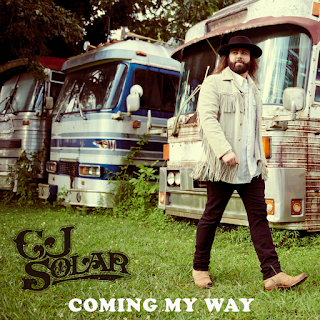 CMT Music premiered CJ Solar’s hilarious music video for his upbeat new single, “Coming My Way,” this morning. The single will be the title track to Solar’s upcoming third EP. The video has also been added to CMT Music 12 Pack Countdown, and fans can vote HERE.

Produced and directed by Thomas Chi and shot near Huntington WV, the video opens with CJ and his band pulling in to a grocery store parking lot to grab snacks on the way to a gig. As each guy wanders through the store, they give each other a mischievous glance. The next scene sees all four wearing helmets and racing shopping carts up and down the aisles. Two cops come in, drop their donuts, arrest two guys and tackle a third, as CJ crosses the finish line in victory. The cashier rings CJ back to reality, he pays for his macaroni and cheese and realizes his bus driver has left the scene.


CJ wrote "Coming My Way" with Jake Mitchell and Hardy, and the single will be the title track to his third EP due out early next year. Check it out now on Apple Music, Spotify, YouTube and Amazon.

CJ opened for Chris Janson last weekend, and this weekend he heads home to Baton Rouge to perform outside Tiger Stadium prior to the LSU vs. Arkansas football game on Saturday.

Keep up with CJ Solar at www.CJSolar.com or on social media: