WILLIE NELSON AND FAMILY, ALISON KRAUSS AND MORE TO PERFORM AT MERLEFEST 2020 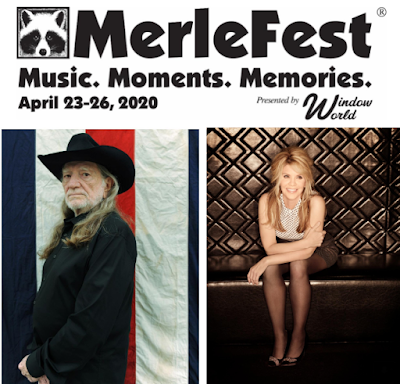 MerleFest, presented by Window World, is proud to announce the initial lineup for MerleFest 2020, which will be held April 23-26. The annual homecoming of musicians and music fans returns to the campus of Wilkes Community College in Wilkesboro, North Carolina, in the foothills of the Blue Ridge Mountains. “For over 30 years, one of the major factors that has built and sustained MerleFest has been the quality of the artists and performances that our guests see over the 4-day festival,” says Ted Hagaman, Festival Director. “People truly feel that the festival is a great value and that is why music fans and families return year after year. We feel that the 2020 lineup again reflects the diversity and quality of performers, and we look forward to another successful festival in April.” The complete lineup for MerleFest 2020 will be announced over the next few months.

Tickets for next year’s festival go on sale November 12, 2019, and may be purchased at www.MerleFest.org or by calling 1-800-343-7857. MerleFest offers a three-tiered pricing structure and encourages fans to take advantage of the extended early bird discount. Early Bird Tier 1 tickets may be purchased from November 12 to February 16, 2020; Early Bird Tier 2 tickets from February 17 to April 22. Remaining tickets will be sold at the gate during the festival.

New for MerleFest 2020 is “The Patio at MerleFest.” This ticket-upgrade includes comfortable seating in a covered area with great views of the Watson and Cabin stages, access to the friends and family seating area (formerly named VIP), a deluxe air-conditioned mobile bathroom unit, snacks and beverages, and live video displays from the Watson and Cabin stages. Fans wanting to gain access to this exciting new addition to MerleFest should act quickly, as seating is limited.
﻿
MerleFest would also like to remind potential participants that the entry period for 2020’s Chris Austin Songwriting Contest is still open. Now in its 28th year, CASC is an extraordinary opportunity for songwriters to have their original songs heard and judged by a panel of Nashville music industry professionals, under the direction of volunteer contest chairperson, Grammy-winning singer/songwriter Jim Lauderdale. Aspiring songwriters may submit entries to the contest using the online entry form at MerleFest.org or by mailing entries to MerleFest/CASC, P.O. Box 120, Wilkesboro, NC, 28697. All entries received during October and November will receive an early-entry discount price of $25 per entry, while submissions received in December and January will require a $30 fee per entry. All lyrics must be written in English and no instrumental entries will be accepted. The deadline to enter is February 1, 2020.
Posted by LovinLyrics at 11:05 AM