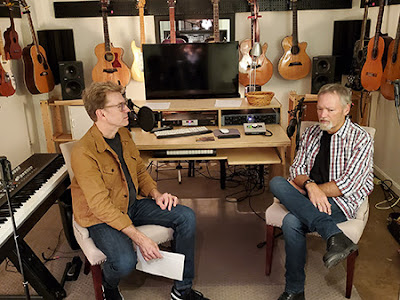 Grammy winning singer/songwriter, John Berry, recently celebrated his 60th birthday along with the 40th Anniversary of his first album, which he self-released on vinyl and titled it “Humble Beginnings” in September 1979. One of his biggest anniversaries to date, is the one year anniversary after his discovery of throat cancer. John is back on tour, currently out on his 23rd Annual Christmas Songs and Stories with John Berry but, took time out of his busy schedule to share his incredible story and personal journey with a new podcast Soundtracker With Lionel Cartwright where he talks about the brain surgery he had the day his first single reached number one, his motorcycle accident when both his legs were broken and of course the battle with cancer. Listen to the podcast(s) below:

“Sitting down with Lionel Cartwright was a pleasure and a real treat. Lionel is a storyteller himself and knows how to bring out the best story inside the person he is having a conversation with,” states John Berry. “Deep and honest communication about our experiences in life is relatable to so many, and you never know who you may reach with your words while sharing your story!”

"Imagine getting the news that your song went number one — on the same morning you’re being prepped for brain surgery. Imagine making your living as a singer — and being told you have throat cancer. Add to these adversities the difficulties of sustaining a music career after your major label deal goes away,” shared Lionel  Cartwright. “John Berry’s life navigation is a case study in perseverance and resilience, with immense takeaway for anyone facing life challenges."

Catch John Berry on the remainder of his 23rd Annual John Berry Songs and Stories Christmas Tour below:

The current single, “The Richest Man,” continues to make an emotional impact with fans and receive rave reviews. It is no surprise that John Berry quickly sells out venues all over the country.  The Entertainment Nexus once described the award-winning entertainer as "one of the most remarkable voices in music."

For more info on John Berry and his music, please visit his website - www.johnberry.com