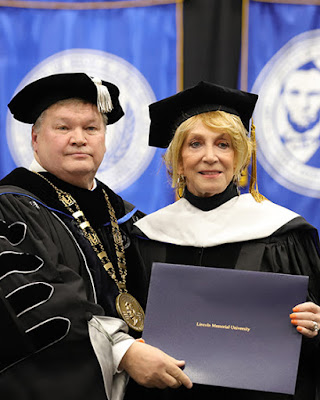 Country music royalty and a fifty-two year member of the Grand Ole Opry, Jeannie Seely was honored by Lincoln Memorial University during its Fall Commencement exercises on Saturday, December 14, in Tex Turner Arena where she received the Honorary Doctor of Arts during the ceremony where more than 350 LMU students also had degrees conferred on them. LMU honored her with its most prestigious recognition for her many groundbreaking accomplishments in the music industry, as well as her support and encouragement of new talent. She joins a small but distinguished group of musicians who have been honored by LMU. This includes legendary bluegrass pioneer Dr. Ralph Stanley and local bluegrass musician Dr. Steve Gulley.

Lincoln Memorial University is a values-based learning community dedicated to providing educational experiences in the liberal arts and professional studies with the main campus located in Harrogate, Tennessee.

“This is an honor that exceeds even my dreams!  I could never have imagined this! I hope that I can always be deserving of  this title in all that I do,” exclaimed Jeannie Seely! “This would not have been as exciting coming from any other University because this is my husband, Gene Ward’s Alma Mater.  I’ve been privileged to watch the growth of this beautiful campus and to get to know the amazing staff. I’m very grateful and I thank you.”

“This is indeed an honor coming from my Alma Mater, as it means so much to me. I appreciate LMU recognizing Jeannie’s accomplishments as an artist and her work behind the scenes,” shared Gene Ward. “I’m so proud of her and feel she is very deserving of this honor.”

“Jeannie Seely-Ward is a true trailblazer in country music. LMU was eager to honor her not only for her accomplished music career, but also for the tremendous mentorship she has shared with up and coming talent throughout her 52 years as a member of the Grand Ole Opry,” said Dr. Clayton Hess, LMU President. “She has used her voice and the stage at the Opry to entertain and enrich lives. LMU is fortunate that she has used that platform to recognize her husband’s, Gene Ward, alma mater several times. Both Gene and Jeannie are great ambassadors for LMU and now we can proudly call Jeannie an official Railsplitter.”

Jeannie Seely has been a member of the world-famous Grand Ole Opry for over 52 years. Along with many accolades including awards from Billboard, Cashbox and Record World, she has achieved No. 1 songs as a solo artist, duet partner and songwriter. In 1966, She won a Grammy award for Best Female Country Vocal Performance for her recording of “Don’t Touch Me.” Early in her career, she was dubbed Miss Country Soul for her deeply moving vocals and the moniker has remained throughout her career. Known as an individualist her entire career, Jeannie Seely became the first female to regularly host segments of the weekly Grand Ole Opry shows.

Jeannie Seely is featured in Ken Burns’ PBS documentary Country Music, which was released earlier this year. She was noted as one of the premier female singers of the late 1960s and early 1970s. Her PBS biography notes “Seely was known for her big heart, emotion-packed voice, and salty wisecracks on stage – ‘Of course I want you for your body. I’ve got a mind of my own;’ ‘An ex-husband is one mistake you don’t have to live with;’ and others – she blazed a nonconformist trail in Nashville, sporting a miniskirt her first time onstage at the Grand Ole Opry and a sassy attitude wherever she went.”

Jeannie Seely continues to record, perform and write in Nashville. “Like I Could,” which she co-wrote with Erin Enderlin and Bobby Tomberlin was a recent No. 1 on the Bluegrass charts, recorded by Rhonda Vincent. She plans to release a new album, An American Classic, on Curb Records produced by Don Cusic in 2020, and continues to host her weekly Sundays with Seely on Willie’s Roadhouse on SiriusXM and proudly hosts Opry segments and performs each week as well as tour nationally.