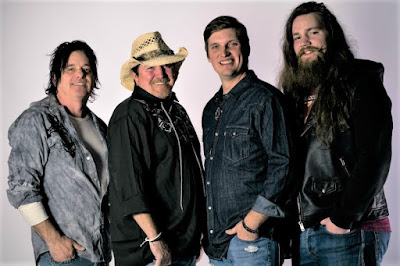 Rising country band, Rivershine, recently released an inspirational music video as an accompaniment to their sophomore single “Like That”. The single is rapidly heading up the Music Row Country Breakout Chart, holding a current spot at #64.

The music video, produced by Chad Coleman Self , is a romantic depiction of a deep love with it's genuine portrayal of the lyrical story line with band and family members featured in the video. Lead singer Richard Chamberlain and his wife give the audience a look into their personal relationship while Richard's parents help tell the story of "Like That" bringing tribute and testimony to their love  of a lifetime. Seeing them so in love leaves no doubt how truly special it is to have a love "Like That".

The song was actually pitched to the band by one of the writers to lead guitarist/vocalist Dave Helbig. “It is such a great song, and when we heard it, we just couldn’t believe no one had cut it before.” The band was happy to take the opportunity and recorded the ballad at Magic Shack Studios with Executive Producers Mark Slaughter and Rivershine. The band took the song to production with Slaughter after sharing the single at live performances and on their radio tour. "We are so thrilled to bring the song to life in video for our fans."

“Like That” was written by Betsy Walter, an award-winning songwriter, producer, arranger and vocalist. As a Producer, she has 2 Billboard Top 10 Charting Albums, 1 Billboard Top 200 Album, and 1 Amazon Top 100 Best Seller.

The single is available on all digital streaming outlets.