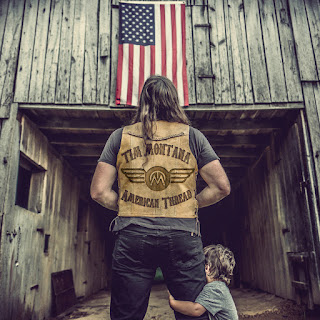 The eleven track tribute to American freedom provides a window into Montana’s life journey and sets him apart as a stand-out artist whose “booming vocals instantly grab attention alongside the ear-grabbing guitar riffs and foot-stomping rhythms” (Billboard) and make him an artist that will not be easily forgotten.

“This album actually began three years ago and the whole process has been exhilarating. In trying to narrow down my songs for ‘American Thread,’ I was fortunate enough to have the opportunity to choose between songs written with a few legends like Kid Rock and Billy Gibbons. They both played a huge part in helping me create a project that I never thought I’d be lucky enough to release,” expressed Montana.

“‘Turnaround Town’ features another hero of mine. In fact, the beginning of the song is the last time I heard my uncle Randy’s voice. When I went back to listen to that voicemail, I knew I needed to have that part of my story added into this record. I can’t wait to finally get this out to the world and hear what all of my fans have to say about it.”

Born and raised in Butte, Montana, Tim Montana grew up with an unyielding passion and determination to make his musical dreams come to life. After appearing on the “Late Show with David Letterman,” Montana made the move to Music City to bring his aspirations to fruition. Soon after, Montana signed to Spirit Music Group and began working with ZZ Top’s Billy Gibbons. Montana has continued making waves in Nashville with his genre-defying music that appeals to both country and rock fans alike.

Most notably, his music has gained support from Charlie Sheen, having his music video directorial debut with Montana’s single “Mostly Stoned.” Other early supporters include Kid Rock, Rob O’Neill, X-Games Champion Travis Pastrana, the Nashville Predators and more. Montana’s recent collaboration with Big Sky Cigars has further demonstrated his ability to connect with audiences outside of music.

To learn more about Tim Montana, visit timmontana.com
Posted by LovinLyrics at 6:05 PM