Single Lands at #7 on iTunes Pre-Order 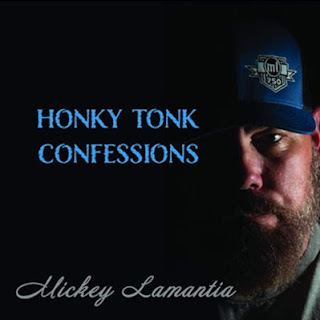 “I had the idea of putting out a series of EP’s called Honky Tonk Confessions, with The Final Chapter being an Album and I asked Buddy Cannon and Marla Cannon-Goodman to co-write this song. It just felt like it would be an instant classic,” shared Mickey Lamantia. “The idea about the series came before the song, so there was some pressure to hit a home run with this song. We wrote the first verse and Marla really stepped up her game on the chorus and second verse. Buddy is one of the best writers ever and Marla is right there with him. This song has everything you could want in a Country song. I mean who doesn't pour their heart out in a Honky Tonk confession.”

“Sooner or later Honky Tonk country music is going to make a roaring comeback into the lives of country music fans and reignite the musical fire that singers like Keith Whitley, Randy Travis and Vern Gosdin had burning so brightly a few years ago,” stated producer Buddy Cannon. “It is going to take a singer like Mickey Lamantia and a song like “Honky Tonk Confessions” to start the wildfire again. Hey, just maybe this is it. Play it and listen to it. Then play it again.”
“...First stool on the corner a guy sits all alone
Drinking like a crazy man to an old Vern Gosdin song
He said Love ain’t nothin’ but a curse dressed up like a blessing”
Then he poured out his pain in a Honky Tonk Confession
Vodka secrets
Whiskey dreams
Long night long neck barroom scenes
Ashtrays full of hard learned Marlboro lessons
Dance Floor laughter
Barstool tears
Right and wrong belong right here
At the altar of the Honky Tonk Confessions …”
Stay current with Mickey Lamantia on his website mickeyml750.com and social media.
Posted by LovinLyrics at 12:32 PM