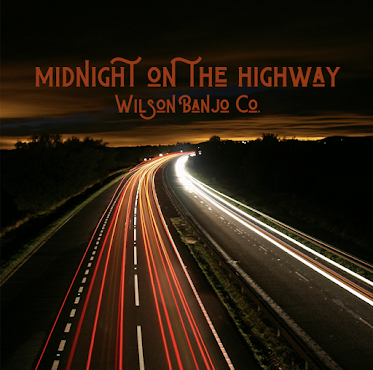 Bluegrass band Wilson Banjo Co. isn’t wasting any time charging forward with their brand new single, “Midnight on the Highway.” Released via Pinecastle Records, the upbeat, high energy recording showcases the ensemble’s fresh and diverse sound. Led by banjo extraordinaire Steve Wilson, the group is gearing up for their new album coming in 2021, Six Degrees of Separation. The new single is available for download and streaming HERE.

“We had a spot left to fill on the record and I really wanted a cover that was something we not only really loved, but also highlighted all the best elements of a straight up driving grass tune,” says Steve Wilson. “‘Midnight On The Highway’ was mentioned during a recording session, and being big fans of Hot Rize, Sarah, Scott and I sat and arranged it right then and there. Sarah’s vocals are so powerful on this track. That combined with monster mando picking from Alan Bibey, great guitar work from Andrew Crawford and those signature tight harmonies from Troy Pope and Scott Burgess, and it all fell into place. We’re so excited about this track and hope you enjoy it as much as we do!”

Singing lead on the single is powerhouse vocalist Sarah Logan. The tune may sound familiar to some listeners, as it was co-written by Tim O’Brien, Pete Wernick and Nick Forester for a Hot Rize project in 1979. Vents Magazine gave listeners an exclusive first-listen of the new single, praising the recording by saying, “It’s a fast-paced good time that really stays true to the signature Bluegrass sound which has been around since the early Bill Monroe days.” The recording serves as the follow-up to “Wrong Turn that Led Me to You” which was released last fall.

The South Carolina based band has deep roots in the Bluegrass genre, with Steve Wilson’s impressive skills as a professional recording engineer and custom banjo builder coming into play. Over the years, he’s engineered recordings for artists like Dale Ann Bradley, Flashback, Gena Britt, The King James Boys, Shawn Lane & Richard Bennett, and many more. To keep up with all the latest Wilson Banjo Co. news, check out their official website HERE.
Posted by LovinLyrics at 4:18 PM