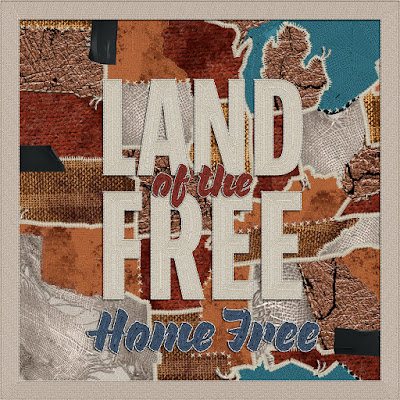 Just in time for Memorial Day, Country’s all-vocal favorites, Home Free, are announcing a special salute to the red, white and blue. They’ll unfurl their patriotic new album, "LAND OF THE FREE", on June 25 via Home Free Records, with pre-orders available today. Chock full of star-spangled covers, all-star collaborations and one standout original, the 10-track project aims to bring a sense of unity to all those who hear it – and fans can get a sneak peek today.
“Based merely on the human condition, our differences are far outweighed by our common ground," explains Home Free's bass singer Tim Foust. “We hope this album serves as a reminder of the unity to be found in our shared humanity.”
Sure to stir up American pride, "LAND OF THE FREE" features all-new versions of tunes that underscore the spirit of the nation – fan favorites steeped in liberty and possibility. Highlights include harmonious renditions of Bruce Springsteen’s “Born in the USA,” Tim McGraw + Tyler Hubbard’s (of Florida Georgia Line) “Undivided” and Brooks & Dunn’s anthemic smash, “Only in America.”
Likewise, the flag-waving set is full of critically-acclaimed collaborations – each one delivered with hand firmly over heart. Unexpected features include a “stirring” (American Songwriter) rendition of “God Bless The U.S.A.” featuring Lee Greenwood and The United States Air Force Band, as well as the group’s “iconic” (CMT) version of “American Pie,” which features the folk-rock classic’s creator, Don McLean.
Home Free’s LAND OF THE FREE Track Listing:
1. “Undivided” (Tyler Hubbard, Chris Loocke)
2. “Only in America” (Kix Brooks, Don Cook, Randall Jay Rogers)
3. “God Bless the U.S.A.” feat. Lee Greenwood + The United States Air Force Band (Lee Greenwood)
4. “Brothers in Arms” (Mark Knopfler)
5. “America (My Country, ‘Tis of Thee)”
6. “Travelin’ Soldier” (Bruce Robison)
7. “The Land of the Free” (Chris Chatham, Tim Foust)
8. “American Pie” feat. Don McLean (Don McLean)
9. “People” feat. Jeffrey East (Jeffrey East, James Ryan Plappert, Michael White)
10. “Born in the U.S.A.” (Bruce Springsteen)
In celebration of the album’s announce, fans are getting a preview with today's release of Home Free's version of The Chicks’ emotional smash, “Travelin’ Soldier,” alongside an official music video. Filmed by The Bolo Brothers in Nashville, the video’s storyline updates the tune’s original narrative in an empowering way, switching up the track’s lead characters, turning the hero into a heroine.
“When Austin [Brown] first suggested we cover this song, it had been years since I heard it – and to be perfectly honest, I had forgotten just how beautiful and tragic it truly is. After listening to it again, I was totally on board,” explains Home Free’s tenor Rob Lundquist. “I know this one hits home for a lot of people – myself included. My dad was in the Army when I was born, and when my parents heard our version of this song for the first time, they both had tears in their eyes. Needless to say, there’s something really special about this song, and I’m so glad we decided to sing it.”
Starting this fall, Home Free will re-embark on their headlining DIVE BAR SAINTS WORLD TOUR with an extensive run of rescheduled dates. Shortly after, the acclaimed group is set to kick off their recently announced WARMEST WINTER HOLIDAY TOUR – a festive trek that kicks off December 1 in Evansville, IN, and hits 14 venues in total through December 19.
KEEP UP WITH HOME FREE
WEBSITE | FACEBOOK | TWITTER | INSTAGRAM | YOUTUBE
Posted by LovinLyrics at 1:52 PM