When you go to an Oak Ridge Boys show, you're going to see Joe Bonsall, Duane Allen, Richard Sterban and William Lee Golden, right? Well of course you are, but have you ever taken the time to say hello to the guys that make up the Mighty Oaks Band? These guys are some of the finest and most talented musicians in the industry with many years of experience under their collars. They've played the stage with some of country's biggest names and stood on some of the world's largest stages in the most popular venues. I am continually impressed by these men that stand on that stage behind the Oak Ridge Boys, every city, every night, every song and travel alongside them mile for mile for over 150 shows a year.

These guys are always on the top of their game, the consummate professionals and the best musicians the business has to offer, always giving 100%, even when they may not feel like it. They are always smiling and laughing, having a great time and that is a huge part of what makes an Oak Ridge Boys show such a great time. I always look forward to attending these shows, not just because of the love I have for the music and the Oaks themselves, but because of the friendships I've established with the guys behind the scenes. They truly don't get any better. I thought I'd take a minute and introduce you to each of them and give you a little inside look into their background. The next time you're at an Oaks show, take the time to say hello to these outstanding musicians and wonderful people. They're friendly, down to earth and so much fun. They are an integral part of the whole Oak Ridge Boys experience. They made it through the storm of uncertainty that was 2020 and they're kicking ass and taking names in 2021.
******************
OK, let me preface this with this (and any true ORB fan can attest that it is 100% truth), ALL of these guys are fun. They are always the jokesters so be sure to keep your eyes on them at all times, you never know what they're gonna do.
RON FAIRCHILD
(KEYS)
Born in 1958 and raised in Music City, Ron has an “Oak Ridge” heritage. His father, Tommy, played piano for The Oak Ridge Boys from 1957 until 1972! Ron has a 20+ year personal history with the group. Ron engineered the digital keyboard system he plays on stage and has built his own recording studio. He's pretty much the "class clown" on stage and at any given time, if you look over at him, he's got a big grin on his face and cracking jokes. When he's not on the road or overseeing his studio, Ron enjoys sailing, photography, learning to fly airplanes, and playing with his HAM radio. 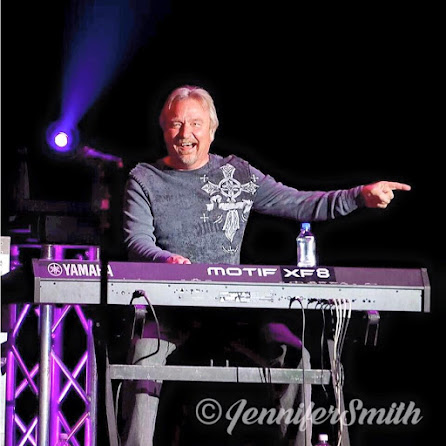 Born and raised in Birdseye, Indiana, Rex grew up in a musical family. His father, four brothers, and sister were “back porch” pickers, playing mostly for their own enjoyment. Rex, who was the youngest, learned to play the mandolin at age five. Eventually he taught himself to play fiddle, guitar, pedal steel, electric bass, dobro, banjo, and mandolin (and God only know what else). When Rex was 11, he became a “professional,” earning money by playing in a local country band with his brother. At 16, he put together his own band. Then in 1980, he moved to Nashville to work with Little David Wilkins. He subsequently worked with John Conlee, Bill Anderson, Rhonda Vincent, Billy Yates, Phillip Claypool, and Clay Walker. Rex’s early dream was for a solo record deal. His timing was less than perfect, however, because contemporary country music was in vogue in the early eighties and he played and sang traditional style. He finally gave up on solo aspirations in May 1985, two months before Randy Travis became an “overnight” sensation! Timing is everything!
Added Note: Rex has released 3 solo albums of his own over the past few years, "Welome Home", "Long Road Back to You"and "Just Love Her", all available on Amazon, CD Baby and iTunes.
SCOTTY SIMPSON (BASS GUITAR) 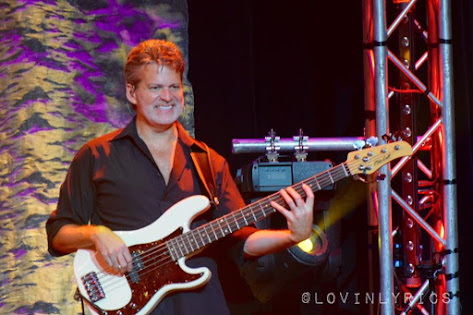 Scotty was born and raised in Dallas, Texas. He began playing guitar at age eleven and within a few years had formed a band with his older brother, Steve. It quickly became apparent there was a problem; everyone wanted to play lead so there was no bass player. Scotty decided to give bass a shot, and the love affair began. He spent every waking hour sitting in front of the stereo, moving a record needle back again and again, until he learned every lick on every album he had. By the time he was fourteen he was playing in clubs. Luckily, his brother, who was ten years older, made for the perfect guardian, so Scotty’s parents allowed him to do so. A week after he got out of high school he took off on the road with a traveling club band—and never stopped. He moved to Nashville in 1996 and within a few months landed gigs with Tanya Tucker, Pam Tillis, and finally settled in with Travis Tritt for about thirteen years. Known as the Long Tall Texan, you can always find Scotty with a smile on his face and getting into some kind of trouble onstage so you have to pay attention. FYI, Scotty also took a deep personal dive into the world of songwriting and released a CD of his own musical thoughts called "The Spice of Life". You can purchase the cd here.  It's a great way to get to know this guy just a little better. PS - if you're at a show, keep an eye on the Scotty and Duane during "Elvira". It'll make ya wonder what they've been up to. LOL!
Jeff Douglas (Guitar, Dobro) 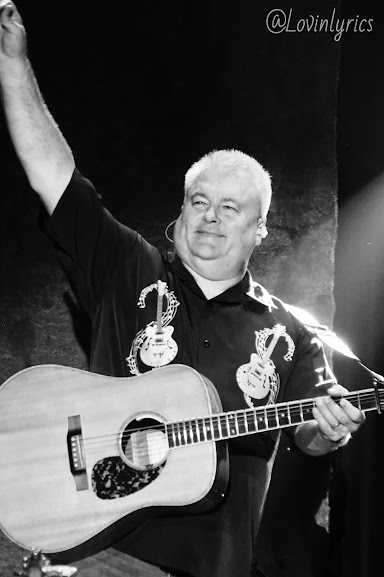 Jeff Douglas was born and raised in Kentucky, spending most of his early years in the small town of Paris. An only child, his dad worked for the Post Office and his mom worked for the local school system. While attending the University of Kentucky, Jeff began working at a music store repairing and building guitars. It was in the local music scene that he met longtime friend, Paul Martin. Through this friendship he met the Oaks. In 1995, Jeff moved to the Nashville area to take a job as the ORB Band Tech. He was later promoted to Stage Manager. Jeff has played the guitar since he was sixteen and in 1999, when the Oaks needed a bit of extra “fill” in the show, he started playing three or four songs on rhythm guitar. However, he played offstage while also attending to his production work! In 2004, the Oaks released their Bluegrass-flavored "The Journey" CD. Jeff immediately bought a dobro and learned to play it so he could contribute to an additional four or five songs on the show. However, when playing the dobro he walks onstage—no longer a ghost player!
AUSTIN CURCURUTO
(DRUMS) 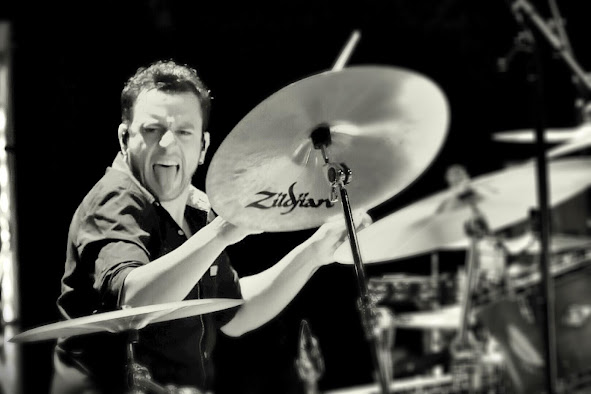 Having grown up learning to play drums from his mother and grandfather at a young age and playing and touring professionally since 2005 with artists such as Krystal Keith, Craig Campbell and American Idol's Bo Bice, he was named runner up for Up and Coming Drummer by Modern Drummer in 2010 and landed his ORB gig in 2017, following the departure of previous drummer, David Northrup, who left for the chance to tour with the legendary Boz Skaggs. Austin has been a perfect fit with his "get it done" attitude and his sense of humor. I haven't gotten to know him as well as the other guys, but I can tell you he's right where he should be in that seat and I hope he continues to fill it for a long time to come.
JAMES WATKINS
(GUITAR) 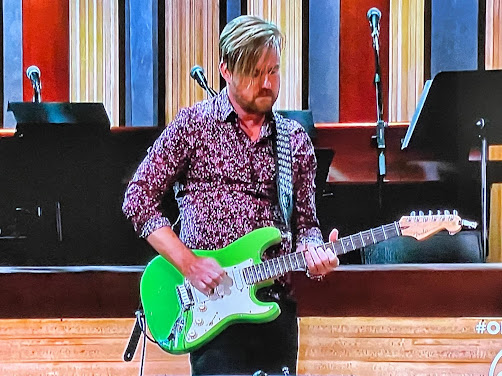 The newest member to the Mighty Oaks Band, and I was so excited to see this announcement when it was made, is James Watkins, a guitarist/songwriter with an extensive touring resume including Hillary Scott, Mark Wills, Steve Holy, Andy Griggs and Krystal Keith. I met James in 2015 when he played a songwriter show with Steve Holy here in eastern NC. Steve had always spoken so highly of his talent and of him as a person. I am so glad the Oaks made the choice to bring James in after Roger Eaton left to spend more time at home and a personal endeavor. James bring a new dynamic to the stage and I can't wait to see what the future brings for him.
Thank you to these guys for giving their all, every night, every show, every mile, every day. You are not just background players, you are the exact definition of what a band is, the support that brings and hold something together. As a fan of your talent and as a friend, I truly appreciate each of you as do so many others.
Go out, get your tickets and see these guys bring their best in person. Nothing beat a live show from the Oak Ridge Boys and the Mighty Oaks Band. Find out if they're coming your way - www.oakridgeboys.com/tour.
Posted by LovinLyrics at 3:57 PM