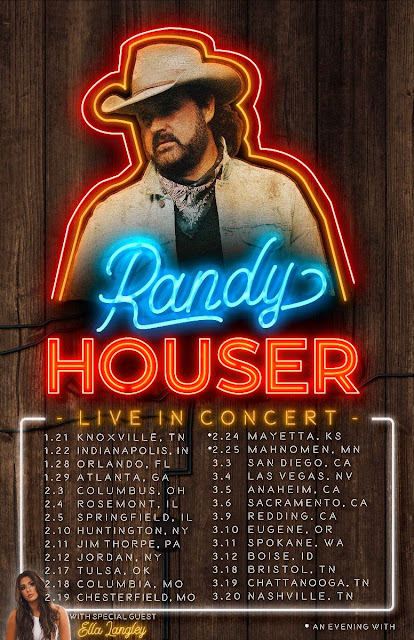 The New York Times opines Randy Houser is “a rich, viscous singer with a tremendous amount of vocal force” and NPR observes he “has always been among the notable exceptions, a performer in the tradition of Delbert McClinton’s, Hank Williams Jr.’s, Travis Tritt’s and Brooks & Dunn’s merging of roadhouse blues muscle and swing and honky-tonk grit.” In his first full tour since co-headlining with Jamey Johnson earlier this year, fans can see the Mississippi native live beginning January 21 when he embarks on a 26-show tour that wraps at the Ryman Auditorium mid-March. Tickets go on sale this Friday, Oct. 29.

“I’ve been spending a lot of time in the studio recording some songs and it’s time we play some of these live,” says the man Rolling Stone raves for his “arena-swallowing voice.” “I’m a big fan of Ella Langley’s and think folks will really dig her sound!”

*Denotes An Evening with Randy Houser
^Denotes on Sale at a Later Date
https://www.randyhouser.com
Posted by LovinLyrics at 2:28 PM