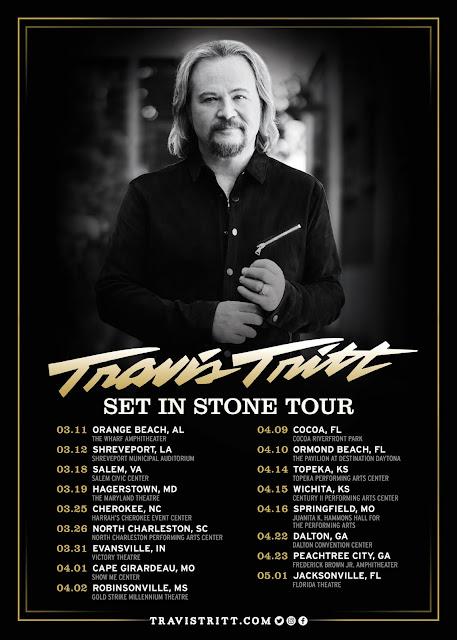 Multi-platinum selling and award-winning artist Travis Tritt has announced his upcoming tour, the Set In Stone Tour, taking place March 11-May 1, 2022.
Throughout the full schedule of shows, fans will have the opportunity to experience a special concert featuring Tritt and his band performing songs off his new album, Set In Stone, and some of his biggest hits, including “Anymore,” “T-R-O-U-B-L-E,” “It’s A Great Day to Be Alive,” and “Best of Intentions.”
Last year, Tritt released Set In Stone, his first original full-length studio album in over a decade. The Grammy winner delivers the quintessential Travis Tritt sound with a touch of Americana and Roots on the album. He pays homage to all sides of his musical personality along with the trademarks of his originality. The Grand Ole Opry member will bring his award-winning songs to life and leave the audience with a memorable experience.

To purchase tickets or for more information on Travis Tritt’s 2022 tour dates, please visit https://travistritt.com/tour/.
Released through Big Noise Music Group and produced by Dave Cobb (Chris Stapleton, The Highwomen, Sturgill Simpson), Set In Stone features 11 new songs, 8 of which were co-written by Tritt.
Travis Tritt’s albums, seven of which are certified platinum or higher, have led him to amass more than 30 million in career album sales, two GRAMMY® Awards, four CMA Awards, including the CMA Horizon Award (now known as the New Artist Award); a Billboard Music Award for Top New Artist, an invitation to become a member of the world-famous Grand Ole Opry and a devoted fan base that has filled venues coast-to-coast. He is also dubbed one of “The Class of ‘89,” which includes Country music superstars Garth Brooks, Clint Black, and Alan Jackson, who dominated the charts in the ‘90s.
Among his eleven studio albums and numerous charted singles are five number ones and 20 Top 10 hits, including “Help Me Hold On,” “Anymore,” “Can I Trust You with My Heart,” “Foolish Pride,” “Best of Intentions,” “I’m Gonna Be Somebody,” “Modern Day Bonnie and Clyde,” “Here’s A Quarter,” “It’s A Great Day To Be Alive,” and more.
Tritt continues to sell-out shows to his devoted fan base, which has filled venues for years. This tour is no different, bringing Tritt’s authenticity and country music coast-to-coast.
Posted by LovinLyrics at 10:24 AM