“We moved the Country Rebel operations from San Diego to the Nashville area for several reasons,” said CFO and Co-Founder Darin Blue. “The main two were to be closer to the artists, labels, management companies and publicists we’re so closely allied with and to immerse ourselves in the industry and learn the business side of music from every angle. Creating Country Rebel Records was in our long-term plans, and signing Justin Holmes is the perfect artist to launch the label.”

Justin Holmes and Country Rebel first connected in 2017 when Country Rebel shared one of Holmes’ cover videos he had posted to Facebook. After sharing to the Country Rebel network of over 18 million Facebook fans, the video went viral and inundated Justin’s inbox and Facebook page with supportive messages and new fans. Country Rebel continued to support and share Holmes’ videos, and in 2019 Country Rebel invited Holmes to participate in ‘The George Jones Sessions’ in which Country Rebel was hosting over 30 artists to film and record acoustic sessions to share and promote on its platform.

While participating in the sessions, Holmes performed his original song, “Damn Addiction.” Since its recording and publishing to the Country Rebel YouTube channel in 2019, “Damn Addiction” has been a fan favorite. In January 2022 “Damn Addiction” was discovered by users on SoundCloud and TikTok, where it has become a viral sensation. The song has now been used in over 9,000 videos (and counting) on TikTok and garnered over 220,000 streams on SoundCloud in a month’s time. The “Damn Addiction” performance video is now approaching 2.3 million organic views on YouTube with one million of those views having amassed in the past month alone. 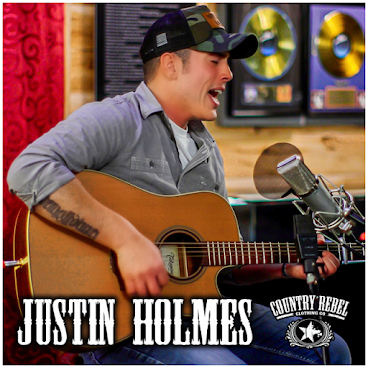 “We first became aware of Justin through his music and we were incredibly impressed by his talent, songwriting and his character as a father and husband,” said Co-Founder Kevin Blue. “His authentic character, passion for country music, and God-given talents made him the perfect first signing for Country Rebel Records.”

A native of Paducah, Kentucky, Justin got his first guitar at 15 years old, shortly before his father passed away. Playing guitar quickly became an outlet for him to express himself and feel a sense of release while dealing with his father’s death. He grew up listening to everything from George Jones, to Metallica, and Prince but found that country music was special. From an early age he loved singing and grew very interested in songwriting and dreamt of being able to sing on stage.

Holmes enlisted in the U.S. Air Force as a Security Forces member at age 18 and spent most of his 14 years of service as a weapons instructor. He took his guitar with him everywhere he went and often played for his fellow service members. Songwriting became an emotional outlet for Justin, pulling from past traumas, addiction, his love for his family, and his spiritual beliefs — intertwining them all in his lyrics.

He continues to reside in Paducah, KY with his wife and children, who he proudly declares are the most important thing in his life. When not promoting his career, free time is spent with them enjoying the outdoors and simply enjoying their lives together.

“Damn Addiction” is streaming now on all platforms.