ELI YOUNG BAND HAS THE “LOVE TALKING” THIS VALENTINE’S DAY 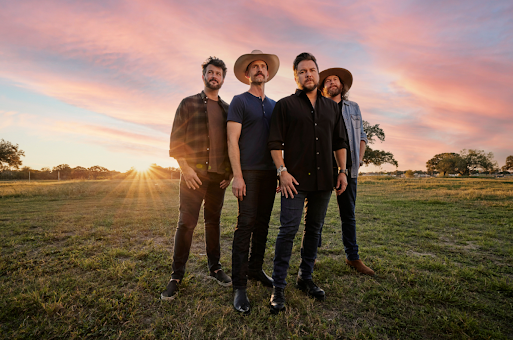 Multi-Platinum hitmakers Eli Young Band embrace the romance of Valentine’s Day with brand new single “Love Talking” going for adds at Country radio today, February 14. The latest song from the GRAMMY-nominated band offers a fresh take on the early stages of a relationship and is available everywhere now.
“In this two minute and 50 second smash, lead singer Mike Eli’s voice embraces listeners like a warm hug,” observes All Access, with MusicRow remarking that “the echo gives the sound some extra juice, and the band is as proficient as ever.” Billboard also named the song among the best of the week upon its release, noting that “this ultra-romantic new release from the group swirls with an irresistible melody and propulsive rhythm.”
Eli wrote the song with Jeffrey East and Eric Arjes, who also produced alongside Jimmy Robbins. “Love Talking” chronicles the morning-after emotions of a vulnerable love-drunk conversation:
When I let it slip that I
Wanted you for my whole life
And you and me turned into us
That was just the love talking
Fans will have a chance to see the new single performed live, along with the band’s multi-decade catalog of hits, as EYB returns to the road for the Love Talking Tour. Kicking off February 17 in Kansas, the outing visits 51 cities through August. Tickets are available at EliYoungBand.com.

Posted by LovinLyrics at 2:10 PM