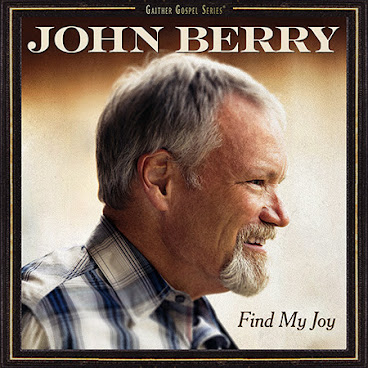 Best recognized for his hit song “Your Love Amazes Me” and his incredible rendition of the Christmas classic “Oh Holy Night,” Berry seamlessly delivers timeless standards “How Great Thou Art,” “Great Is Thy Faithfulness,” “I Surrender All” and several new songs, sharing the hope he has found personally with listeners everywhere. Berry’s rendition of the classic “I Surrender All” is available now wherever music is streamed. A second track, “How Great Thou Art,” will be available on March 4. The pre-sale link is available here.

Arranged and produced by multi-award-winning producer Steve Dorff, the project was recorded at Dorffmeister Studio, Sound Stage and Masterfonics. It was engineered by Craig White with assistance from David Bates and Joel McKenney; and it features keyboards by Jimmy Nichols, guitars by B. James Lowry and Justin Ostrander and background vocals by Tania Hancheroff, Kim Keyes, Joe Chemay and Robert Bailey. The album was programmed by Gene Miller with additional keyboards played by Dorff. Caelan Berry played drums on “Live Like You” and “How Great Thou Art.”

“I loved the idea of putting my musical spin on some of these incredible pieces of musical art,” added Steve Dorff. “John was so very collaborative in letting me be inventive in my approach to the overall sound and the production of the project.”

Dorff had not grown up listening to the traditional (Christian) versions of some of these songs and had not heard a few of them before, but he was drawn to the beautiful melodies. This allowed him to bring a unique sound and fresh ear to the production of these standards, adding his creative elements to the production, including an impressive string orchestra and choir.

The performance of “Something Bigger Than Me” included the 60-piece Utah Symphony Orchestra, arranged by Larry Herbstritt and conducted by Dorff, with piano from award-winning studio musician and recording artist Gordon Mote.

The title track was written in September 2020 by Dorff and Jack Cassidy. When Dorff played the song for Berry and his wife, Robin, while planning the new recording, Berry immediately connected with the message. He had been through a hard season physically, emotionally and mentally–battling throat cancer and carrying the burdens felt worldwide as he navigated the touring impacts of the pandemic. Diving into the new album and hearing and recording this song was part of his journey to find joy again.

“I love the opportunity I have had to create new music, and it is awesome to look back here at the beginning of a new year and see that for 10, 20, 25 years I have had new music to share. Amazing!” exclaimed Berry.

Showcasing Berry’s unmistakable voice that has garnered Platinum records and 20 hit singles, Find My Joy, available on Gaither Music Group’s Gaither Gospel Series, is distributed by Capitol Christian Music Group and Universal Music. The recording will be available to download and stream on all digital music platforms and at Christian retailers on March 25, 2022. Pre-orders can be placed now on Gaither.com and Amazon.com.

“Gaither Music Group is honored to partner with John and his team for this special recording,” stated Paul Sizelove, president of Gaither Music Group. “John has impacted countless people with his songwriting, performances and radio hits. He has developed a brand of faith and family that brings uplifting entertainment as well as encouragement to listeners, and we are excited to introduce his renditions of these timeless songs on the Gaither platforms.”

There is a backstory to this project. John was deep in the middle of his throat cancer treatment during Spring 2019 and as one can imagine, he was not in a good place as it was very hard for him physically, emotionally and mentally. Fast forward to 2020 and the world was navigating Covid and touring artists were faced with dealing with the issues of canceling tours and the unknown future as much of the world as we know it was shut down. John found himself looking for ways to keep productive and he was ready to dive into recording a new project. The single, “Find My Joy,” was written in September 2020 by Steve Dorff and Jack Cassidy. Jump ahead to January 2021, Steve Dorff played the song for John and his wife, Robin while meeting to discuss Steve arranging the songs for John’s new project. John immediately knew he wanted to record this song for his new faith-based album. It was shortly thereafter they discussed Steve producing the whole project. Hailing from New York City, Steve had not grown up listening to the traditional (Christian) versions of some of these songs and hadn’t even heard a few of them before but was drawn to the beautiful melodies, which allowed for him to bring a unique sound to the production of these standards. When John arrived at the studio to record vocals, Steve had added his creative elements to the production, including an impressive string orchestra and choir, to bring this incredible music to life. End result – this music is incredible!

2.) I Surrender All - Traditional arrangement by Steve Dorff / John Berry

5.)It Is Well With My Soul - Traditional arrangement by Steve Dorff / John Berry

6.) Something Bigger Than Me - Steve Dorff / Marty Panzer


Stay current with John Berry on his website www.johnberry.com

Posted by LovinLyrics at 5:26 PM