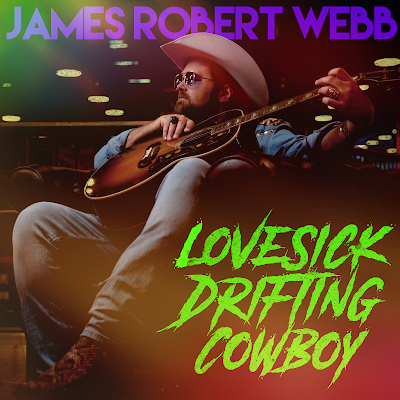 “We wrote this song pre-pandemic, back in 2017. It was inspired by country icon and legendary songwriter, Hank Williams Sr. The title of the song is a nod to both Hank's band and his famous cover of 'Love Sick Blues.' It was one of his most enduring songs although his team didn’t want him to record it. Everyone has an opinion on Hank, but I consider him to be the original outlaw country artist with a tragic ending. He was also just a massive superstar and a big component of his music was pop and blues," says James.

James Robert Webb goes on to offer insight into the creation and recording of the song: "For me, 'Lovesick Drifting Cowboy' is a more visceral song. I wanted to evoke that character of a tortured artist trying to find his way. For the recording process, I wanted to update that 'Hank Sr. country roots sound' by way of the blues. That’s certainly what Hank was and I wanted to pay homage to that. When I listen, I can see Hank's band traveling in their old bus down that dusty Lost Highway--like an old desert road with tumbleweeds blowing past a cactus. There’s also an edge that reflects my influences--it’s definitely a preview of what's to come for me as an artist. 'Lovesick Drifting Cowboy' is a solid song; It's got that southern rock country vibe that we all need, even if we don't think we do."

Already a hit at radio, "Lovesick Drifting Cowboy," has notched “highest debut” honors on both the Texas Regional Radio Report and MusicRow CountryBreakout charts, at No. 62 and No. 72 respectively. It was the No. one most downloaded on CDTex and on debut week obtained a trifecta at Texas radio of highest debut, No. 62, with highest spin increase and most added.

"James sings his butt off on this one, showing range I didn't know he had...well done!"
-Rob Spangler, Queen B Radio
“James Robert Webb has taken himself to the next level. Little Waylon vibe,
Charlie Daniels' too. Country through and through!”
- Doris Day, KXIA, Marshalltown, Iowa
“If you want to know why JRW is the Music Row Independent Artist of the Year just listen….’nuff said!”
- Mike Thomas, PD/MD, KFAV, Warrenton, MO
This latest single from James follows his first Texas Radio No. 1 song for his single, "Stealing Home" which topped the charts in March. He was also awarded MusicRow's Independent Artist of the Year in February. To keep up with all things James, please visit jamesrobertwebb.com