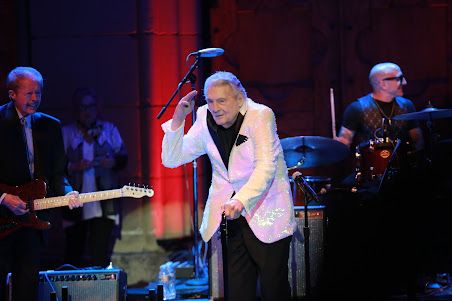 Galante, Lewis and Whitley received country music’s highest distinction and were honored with heartfelt remarks and inspired performances of songs associated with their careers. The following is a list of the artists (listed in the order they performed), as well the Hall of Fame members who were personally selected by each inductee to present them with their medallions.
Jerry Lee Lewis (Veterans Era Artist category)
An explosive rockabilly showman, Jerry Lee Lewis was also among country music’s most expressive performers, with a distinctive and dynamic style as a singer and pianist. His biggest releases on Sun Records, “Whole Lotta Shakin’ Going On” and “Great Balls of Fire,” were country #1s as well as pop hits. In the late 1960s, the Louisiana native shifted from rock & roll to country recordings, invigorating his artistry. Between 1968 and 1981, he had 34 Top 20 country hits, putting his personal stamp on songs ranging from classics by Jimmie Rodgers and Hank Williams to newer works by Mickey Newbury and Kris Kristofferson.
· Lee Ann Womack singing "Middle Age Crazy"
· The McCrary Sisters with "My God Is Real"
· Chris Isaak performing "Great Balls of Fire"
· Medallion Presentation: Country Music Hall of Fame members Hank Williams Jr. and Kris Kristofferson
Joe Galante (Non-Performer category)

Galante distinguished himself as one of country music’s most successful record executives. He helped steer the careers of Alabama, Clint Black, Kenny Chesney, the Judds, Martina McBride, Brad Paisley, Keith Whitley and other best-selling artists. Born in New York, he joined RCA Records after college and moved to the label’s Nashville office in 1974. Eight years later, he became head of RCA Nashville. He rose to hold a series of key label-executive positions, including president of RCA Records’ U.S. operations, head of RLG Nashville and, finally, chairman of Sony Music Nashville until his retirement in 2010.

Keith Whitley (Modern Era Artist category)
A premier vocal stylist, Keith Whitley (1954-1989) helped define country music’s new traditionalist resurgence of the 1980s. Born near Sandy Hook, Kentucky, he proved an adept singer and guitarist as a youngster. After apprenticing in the bluegrass bands of Ralph Stanley and J. D. Crowe, he signed with RCA Records. In five years as a solo artist, he recorded a dozen Top 20 country singles, including five consecutive #1 hits. His career was cut tragically short at age 34. Five months after his death, his recording of “I’m No Stranger to the Rain” was named CMA Single of the Year for 1989.

The ceremony concluded with a performance of "Will the Circle Be Unbroken," led by Country Music Hall of Fame member Bill Anderson.

Produced by the staff of the Country Music Hall of Fame and Museum, the annual Medallion Ceremony celebrates the unique talents, personalities and backgrounds of each Hall of Fame inductee, as well as the important turning points and the breakthrough artistic achievements that defined their careers. The ceremony includes speeches, live musical tributes and original video biographies, created by the museum staff using recorded performances, past televised interviews and historic photos culled from materials in the museum’s Frist Library and Archive.