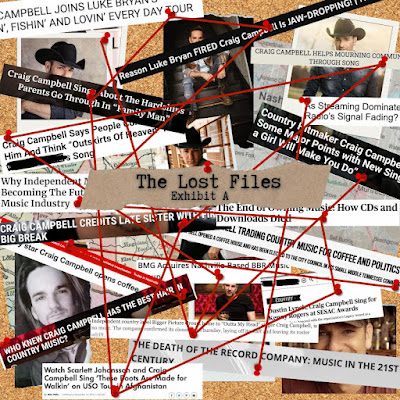 Neo traditional country artist Craig Campbell launched his Grindstone Recordings label in 2020 and has been releasing music and banking even more over the last few years. Answering the call of his fans, he will release The Lost Files: Exhibit A album on February 17, 2023. The first single, “Tractor Songs,” was written by his good buddy Walker Hayes and will hit January 27, 2023.

“This album has been a long time coming,” said Craig. “This collection of music is very special to me, I have been chomping at the bit to get this to my fans. These are songs that I love and believe in with all that I am. My fans fell in love with me when there was steel and fiddle on my records. I truly hate that I got away from that for a bit trying to chase something that wasn’t real, but I humbly admit, I am a work in progress. Not everyone is going to love this album, and I am ok with that. However, THIS is the real me. Unfiltered, unapologetic, and from my heart.“

The 16-cut album is a compilation of recent recordings and “lost” songs he recorded for previous labels but were never released. Travis Tritt, Trea Landon, and Craig's wife Mindy are featured on three of the cuts.

Hayes is the sole writer on “Tractor Songs,” and he produced the track with Luke DeJaynes. The story behind Craig recording the song began after the two played a show together in Orlando.

“As I listened to Craig’s set that night, I thought, ‘man, I forgot how unreal his voice is – one of my Top 5 favorite voices,’” said Walker, who is the sole writer on “Tractor Songs.” I met him as soon as he walked off the stage and pleaded with him to let me send him a song or two. ‘Tractor Songs’ was one of them. He sings it like he wrote it, his voice and the song belong together. No one could do it better, and I wouldn’t want anyone else on it. Praise God Craig and I are always bumping into each other. He’s one of the reasons I love this town.”

“Sometimes you hear songs on the radio and say ‘Man! That’s a hit! I wish I could cut that before they did,’” Craig added. “All I can say is I’m glad I cut this before anyone else! Shoutout to Walker for sending this song to me first.”

“Tractor Songs” will be available through all streaming services from Craig’s Grindstone Recordings label, which is distributed by Stem. Following a busy 2022, Craig will be hitting the road next month on a nationwide tour to promote the single and album.

In addition to writing, recording, touring and running his record company, Craig and his wife Mindy accomplished a longtime dream of opening Grindstone Cowboy in their home of Eagleville last year. The popular coffee shop and restaurant doubles as a music venue, and will see a number of headline artists perform in the coming weeks.

As a new business owner, Craig wanted to serve the residents of Eagleville in a greater way and ran for and won a seat on the Eagleville City Council. He was sworn in last month and is one of five city council members, who along with the mayor and vice mayor, oversee planning, budgeting, citizen concerns, and more for the growing Middle Tennessee community.

1. “Lot To Live Up To” featuring Travis Tritt


4. “Things You Do In A Truck” * featuring Trea Landon

For updates on tour dates and other news about Craig, visit:
https://www.craigcampbell.tv/