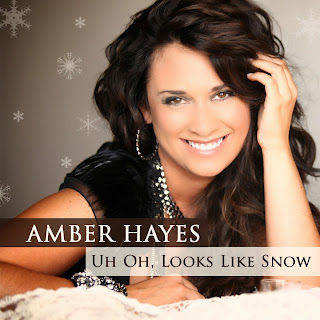 The fun wintertime tune tells the story of a girl who wishes for a snowstorm so she can stay in and cuddle with her loved one. The upbeat track was co-written by Hayes and Bill DiLuigi.

“This time of year is all about giving back,” said Hayes. “My fans have been so supportive, and without them, I would not be able to make a career doing what I love. I want to give back to my fans with this song. Hopefully, it will put a smile on their face.”

This holiday season, fans can also see Amber Hayes in the major motion film “Cowgirls N' Angels,” which is scheduled to air on the Starz network starting Dec. 4. The movie features three of Hayes’ songs, including her 2010 Top 40 Music Row single, “C’mon,” which can be heard in the “Cowgirls N’ Angels” preview trailer here. Hayes plays a honky tonk singer in the film and performs the song as part of a prominent line dancing scene. Also included is “Always There For Me,” a previously unreleased duet with Lonestar front man Richie McDonald, who has a cameo as her father in the same scene. “Right As Rain” is the third Hayes track featured in the film. All three songs are included on the official “Cowgirls N’ Angels” soundtrack, available on iTunes or Amazon.com. To see when “Cowgirls N’ Angels” will air in your area, click here.
The Timothy Armstrong-directed “Cowgirls N’ Angels” stars Oscar-nominated actor James Cromwell (“Babe,” “L.A. Confidential,” “The Green Mile,” “The Artist”) Bailee Madison (“Bridge To Terabithia,” “Brothers,” “Just Go With It”), Alicia Witt (“Friday Night Lights,” “The Mentalist”) Frankie Faison (“The Silence of the Lambs,” “The Wire”) and Jackson Rathbone (“Twilight” films) among others.
“Cowgirls N’ Angels” follows the adventures of young Ida Clayton (Bailee Madison), who joins a group of female rodeo trick riders in a quest to find her real father.

Oklahoma native Amber Hayes first broke onto the Country music scene after her starring role as Kathy Twitty in the 2008 Conway Twitty musical, “It’s Only Make Believe.” Amber released her debut EP C’mon in 2010, landing two Top 40 singles (“C’mon,” “Wait”) on the national MusicRow Country Breakout chart. In October 2012, she released her sophomore album, Any Day Is A Good Day. Shortly following, Billboard’s The 615 named her as “One To Watch in 2013” and she opened up for one of her biggest musical influences, Reba McEntire, in Durant, Oklahoma. Amber's title track of her album, “Any Day Is A Good Day,” scored Amber her first Top 30 record.