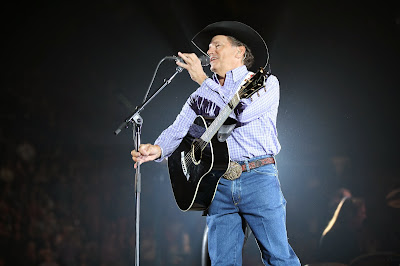 NASHVILLE, Tenn. (Dec. 5, 2013) – Tickets for legendary country artist and CMA Entertainer of the Year George Strait’s final tour stop at AT&T Stadium in Arlington, Texas will officially go on sale tomorrow, Dec. 6, 2013. The 100,000-seat capacity stadium is home to the NFL’s Dallas Cowboys and a fitting venue for the last date on Quicken Loans Presents George Strait’s The Cowboy Rides Away Tour 2014.

Tickets will go on sale on Strait's official website Friday, Dec. 6 at 10:00 a.m. CST. Country fans will also have the opportunity to purchase standing-room-only (SRO) tickets for the final show, starting at an affordable $35 per ticket.

Additionally, CID Entertainment is offering VIP experiences and travel packages for purchase. The “Ace in the Hole” package includes premium seating, an invitation to an exclusive pre-show party in “The King’s Tavern Lounge” with complimentary food and cash bar, a tour of “The King’s Exhibit” (a private exhibit of George Strait memorabilia from his own collection), a VIP parking pass, VIP laminate, limited merchandise gift and tour poster, private merchandise shopping, and an on-site event host. A limited number of “The Troubadour” VIP packages secures one front row seat in addition to the pre-show events and access listed above, plus a guitar signed by George Strait.

Travel packages for two people include a choice of “Troubadour VIP,” “Ace in the Hole VIP” or “Premium Reserved” tickets for the show; hotel accommodations at top-quality properties near AT&T Stadium with shuttle transportation to and from the show, and official George Strait merchandise. For more information about travel packages or VIP tickets, please visit www.cidentertainment.com/georgestrait.

George Strait will be auctioning off two pairs of front row seats plus meet-and-greet passes to each show on the tour, with proceeds benefiting The Jenifer Strait Foundation, a foundation that focuses its donations on various children's charities including Boys and Girls Clubs of San Antonio and St. Jude's Ranch. For more information or to participate in the auction, click here.

Special guests have been invited to perform at each stop on Quicken Loans Presents George Strait’s The Cowboy Rides Away Tour 2014. Dates and performers are as follows:

Although this is Strait’s final concert tour, he will continue to record new music for longtime label home MCA Records and will perform select dates across the country after the tour has wrapped. Strait's current single, "I Got A Car," is the third release from his chart-topping 40th album Love Is Everything and was penned by Tony Douglas and Keith Gattis.