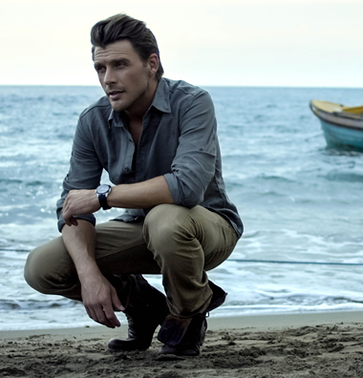 Robby Johnson's video for this debut single "South of Me" has been a massive success. The longing in the song is captured perfectly by a beautiful Jamaican backdrop. French-Canadian by birth, Robby learned English by consuming American pop culture through television and radio. Now he's making some culture of his own, he co-wrote 5 of the 10 cuts off his debut album, including "Feel Good Song", "I Need My Honey", and "South of Me". A release date has not been set but a preview of the album can be heard at www.robby-johnson.com.

The video has been seen by over 2.7 million viewers on YouTube since it was released a few months ago. The video has also seen success on CMT Pure’s 12-Pack countdown, spending seven weeks in the No. 1 spot.


Johnson’s album has yet to be released, but the Canadian-born singer is seeing a rare amount of success for an independent county artist. ‘South of Me’ is currently top 40 on the Music Row chart, and No. 1 New and Active on the Billboard Indicator chart.

Johnson, whose first language is French, co-wrote five of the 10 songs that will appear on his upcoming album, including ‘Feel Good Song,’ ‘I Need My Honey,’ and ‘South of Me.’ A number of his songs can be previewed at robby-johnson.com.

No release date has been announced for the album, but the ‘South of Me’ single is available for purchase on iTunes.

Posted by LovinLyrics at 7:09 PM