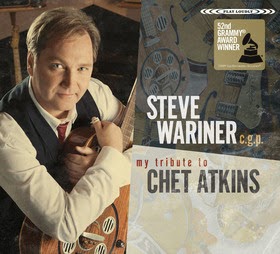 “Besides being a musical icon and a close friend of mine, Chet Atkins was also an early investor in Cracker Barrel Old Country Store®,” said Wariner. “I’m thrilled that they wanted to add my tribute album to the catalog of great music available in their stores. I encourage my fans to visit their local Cracker Barrel, get a copy of the CD, and stay for lunch!”

Wariner has won four GRAMMY Awards, four CMA Awards, and one ACM Award. The Grand Ole Opry member has had 14 No. 1 hits, more than 30 Top Ten hits, and 15 BMI Million-Air Awards for writing songs that have been played more than one million times on radio. He has been inducted into the Music City Walk of Fame, National Thumbpickers Hall of Fame, and Kentucky Music Hall of Fame. In addition to writing many of his own hits, Wariner has written or co-written songs that were recorded by Clint Black (including the No. 1 hit "Nothin' But the Taillights" and the Top 5 hit "Been There"), Garth Brooks (the No. 1 hit "Longneck Bottle"), Keith Urban (the No. 1 hit "Where the Blacktop Ends"), Bryan White (the Top 20 hit "One Small Miracle"), and many others. Other artists to record his songs include Alabama, Diamond Rio, Doyle Lawson & Quicksilver, Kathy Mattea, Del McCoury Band, Kenny Rogers, the Statler Brothers, Peter Tork, Conway Twitty, Clay Walker, Don Williams, and many more.