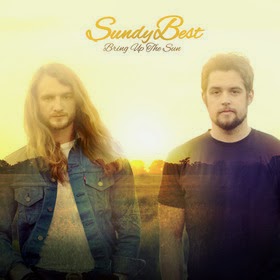 NASHVILLE, Tenn. – (March 12, 2014) – Sundy Best, one of today’s most talented about new talents, made an impressive debut with Bring Up The Sun this week at #11 on the Billboard Magazine Top Country Album chart. Nick Jamerson and Kris Bentley wrote or co-wrote all the tracks, with R.S Fields in the producer chair on the eOne debut, which is now available everywhere.

With the strength of such early believers as CMT, Sirius/XM, Zuus, GAC, Country Weekly, The Grand Ole Opry, the kinfolk and many others, Sundy Best is experiencing a great first week of sales. “We are beyond humbled and ecstatic to have such support as we pull out of the gates,” says Sundy Best. “Our fans that have been with us from the beginning at Redmon’s in Lexington and all of those who are helping spread the word on our behalf is a truly amazing deal.”

The duo, whose two-man live show is garnering exceptional reviews, is currently touring across the US with a few stops in Kentucky during street week to be honored by the state of Kentucky declaring March 4th as “Sundy Best Day” across the state, to several sold out shows and a hometown in-store that resulted in strong sales for Bring Up The Sun.

Please visit HERE to find out more about the up and coming duo.
Posted by LovinLyrics at 6:47 PM