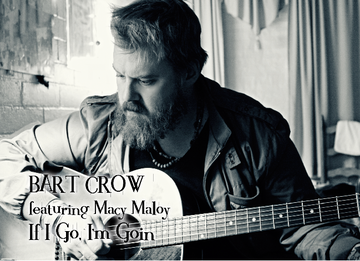 “I listened to the song and fell in love with it instantly. Hearing it, I really felt the power that music had and I wanted to go into the studio and recreate the natural beauty of the song. Having Macy on the track has been incredible and I hope fans will want to replay this track over and over again,” says Crow.

Written by John Elliott, Gregory Alan Isakov and Johann Wagner, ”If I Go, I’m Goin” was produced by Justin Pollard and is the follow up to the playful, fan-favorite “Loving You’s A Crime.”

Crow has hit multiple milestones in his career, solidifying him as one of the most dynamic live touring artists across Texas, Nashville and beyond. Known for his high-energy concerts, he has played to packed crowds nearly 200 days a year and opened for the Randy Rogers Band and Eli Young Band.

The Maypearl, TX native has earned five chart-topping No. 1 songs on the Texas Country Charts including “Run With The Devil,” “Dandelion,” “Saying Goodbye,” “Little Bit of Luck,” and “Wear My Ring,” which has sold over 165,000 copies to date. His fourth studio album, DANDELION, captures all the songwriting skill, vocal prowess and blue-collar believability that have made him a fan favorite and one of the most-respected ‘under the radar’ artists in country music. Selling more than 30,000 albums to date, he has garnered praise from Country Weekly, AOL’s The Boot and many more.

Watch an acoustic performance of “If I Go, I’m Goin” HERE.

Posted by LovinLyrics at 7:52 PM