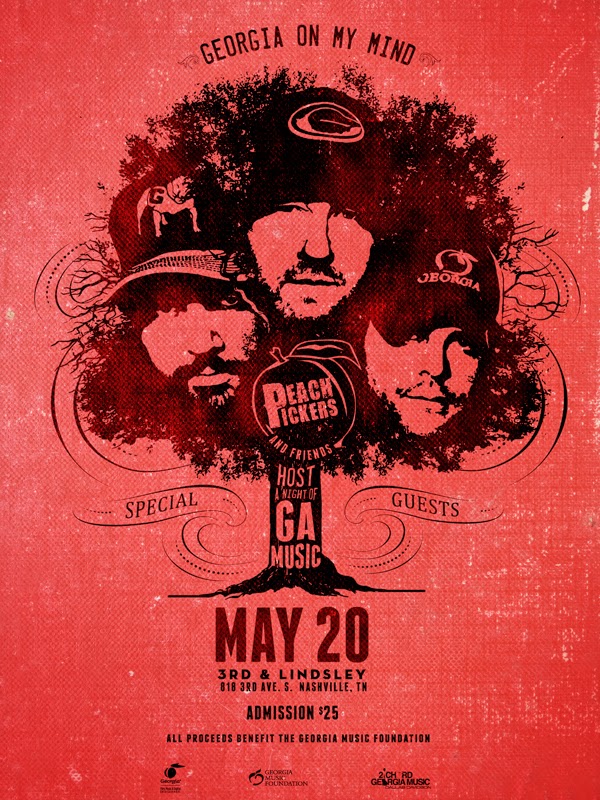 NASHVILLE - Tenn. -- May 15, 2014 – Expect a hit parade at 3rd and Lindsley in Nashville on May 20 when Jameson® Irish Whiskey in partnership with The Peach Pickers and Friends host “Georgia On My Mind: A Night of Georgia Music.” Dallas Davidson, Rhett Akins and Ben Hayslip, who write collectively as the Peach Pickers, are gathering together other Georgia expatriates living in Nashville to celebrate their home state by performing songs written or made famous by Georgians. Artists and songwriters set to perform include Pat Alger, Tony Arata, Luke Bryan, Brent Cobb, Sonia Leigh, Jordan Rager, Daryle Singletary, Cole Swindell and Cole Taylor. Admission is $25 and proceeds benefit the Georgia Music Foundation, a non-profit organization chaired by Davidson that is celebrating 20 years of supporting programs that foster an appreciation for Georgia’s rich music heritage.

“It’s crazy how many musicians and songwriters on the charts are from Georgia and how many homegrown influences we have in common from Otis Redding and the Allman Brothers Band to Ray Charles and Gram Parsons,” Davidson said. “It’s really grounding to have a shared sense of identity around our state, the Flint, Tybee, the pecan trees, the Varsity, the Braves…I think it’s those authentic Georgia traditions and roots that have resonated with audiences over the decades and that will make this night like a family reunion.”

“The state of Georgia couldn’t ask for better ambassadors than our country musicians and songwriters,” said Georgia Department of Economic Development Commissioner Chris Carr. “Whether it’s Alan Jackson singing about the Chattahoochee or Luke Bryan bringing Parade magazine to his hometown of Leesburg – Georgia artists are always talking about their Georgia roots. We hope this event serves to strengthen relationships and develop new mutually beneficial partnerships between Nashville and Georgia’s music industry.”

The presenting partner of “Georgia On My Mind” recognizes the value in celebrating Georgia’s contributions to country music. “Jameson• Irish Whiskey has always supported local communities where music is at the heart, so we are delighted to support the coming together of Georgia’s amazing local talent for such a great cause,” said Sonia Bajaria, Brand Director.

Doors open at 6 p.m. and music starts at 8 p.m. Expect lots of special guests and the Braves vs. Brewers game to be on any televisions in the room.

Posted by LovinLyrics at 1:56 PM