GEORGE DUCAS SET TO LAUNCH “ALL KINDS OF CRAZY” 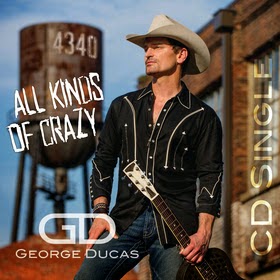 NASHVILLE, Tenn. (June 24, 2014)—One of country music’s finest hit-makers and celebrated recording artists George Ducas is set to release his newest single “All Kinds Of Crazy”** from his independent album entitled 4340 (Loud Ranch Records) to a worldwide audience in July. [The track shipped to radio Monday, June 23, 2014 (via PlayMPE-6/23/14) and will impact radio as official July 21, 2014.]

Branded by Ducas’ contemporary edge and quintessential delivery, “All Kinds Of Crazy” is laced in pulsating guitar riffs with resonating cymbals echoing the internal anguish and torment of an obsessed memory. The “break-up” tune reveals a missed presence and yearning for the past to fast forward into the present and bring love back to life. Recorded alongside decorated producer Matt McClure (Lee Brice/HARD 2 LOVE), the self-penned original accelerates today’s musical content to capture authentic emotion in masterful composition and vocal performance.

“It all started with a guitar riff that I couldn’t get out of my head after playing the House Of Blues in Houston one night,” recounts George Ducas. “I recorded the guitar part on my cell phone in the hotel room that night and the next morning, I wrote the tune in less than three hours.”

The July 2014 national radio release enjoyed a “big welcome back” from country radio and fans alike; the 2013 CD (4340) is Ducas’ first full-length album since his critically acclaimed Capitol Records releases. Without exception, 4340 showcases Ducas’ talents to illuminate storylines with defining imagery that brings lyrics to life and is stocked with radio worthy tracks; “All Kinds Of Crazy” is poised to stack up among contemporary country recordings in the chart-topper ranks. [Jerry Duncan Promotions and Marco Promotions will team to head-up the radio promotions campaign.]

Since making his entry in the country music genre, George Ducas enjoyed success as a Nashville major label recording artist with a string of hits including “Teardrops,” “Hello, Cruel World” and his Top 10 single "Lipstick Promises.” With a noticeable personal “presence missed” on mainstream radio in recent years, it is only the sound of his voice that was silent in the interim. Holding his position as a relevant member of the songwriting community and a mainstay in the recording industry, Ducas’ musical compositions have been recognized by his peers and heard loud and clear over the airwaves.

In line with his own recording credits, Ducas’ name can be found behind the pen of some of country music's biggest hits including: Sara Evan's No. 1 "Real Fine Place To Start," Josh Thompson's "Won't Be Lonely Long," The Eli Young Band's "Always The Love Songs" as well as cuts recorded by George Jones, The Dixie Chicks, Garth Brooks, Trisha Yearwood and the Randy Rogers Band, only to name a few.

Posted by LovinLyrics at 2:00 PM